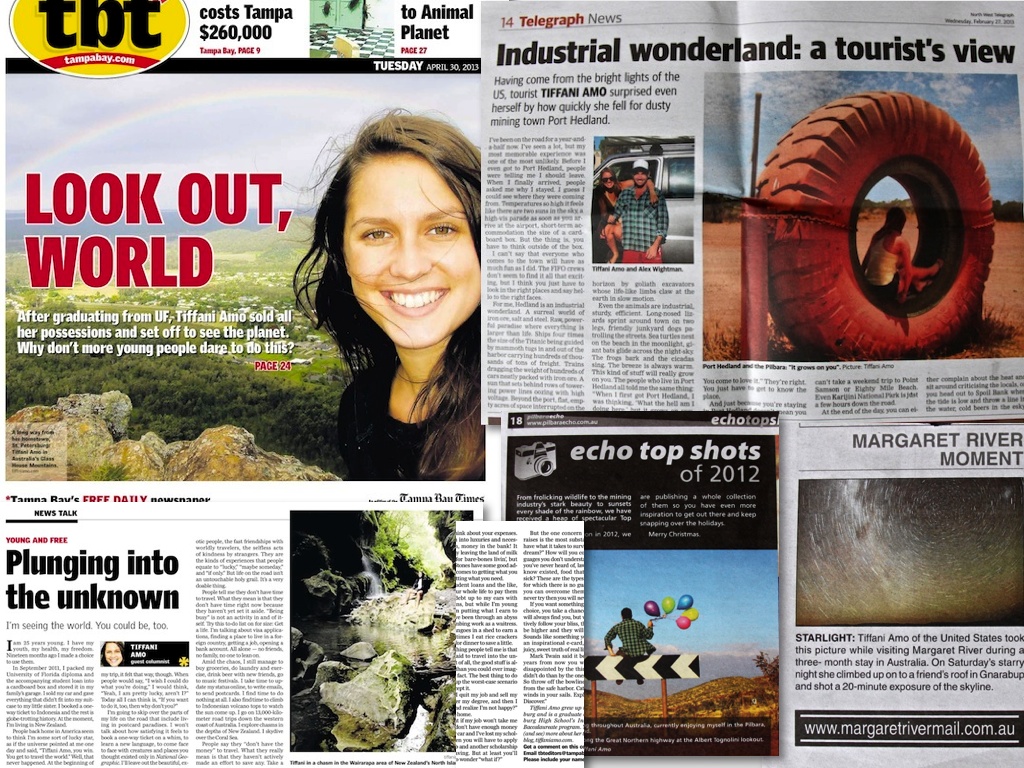 A Brief Encounter With The Media

If you’ve ever wanted to feel uninspired, here’s your chance: In this exclusive interview, we reveal next to nothing about Ms. Tiffani Amo, a Heuveltonian who has been traveling the world for almost two years. A 25-year-old female with two parents, Tiffani’s ambitions abroad include working minimum wage jobs and visiting countries that are close together.

As printed in the Ogdensburg Journal:

Tiffani F. Amo hasn’t been stateside in a year and a half.

Since the fall of 2011, the 25-year-old Heuvelton native has spent her time visiting Australia, Indonesia and New Zealand, where she currently lives.

“I’ve been here since the beginning of February,” Ms. Amo said of her time in New Zealand. She currently works in a café in Wellington, the nation’s capital.

“I came here because it’s really close to Australia. It’s easy to get a work visa, and I needed the work,” she said.

Ms. Amo isn’t planning on staying in Wellington much longer.

She is already planning on moving north to New Plymouth, New Zealand, where she will stay until she feels like moving on.

“I don’t know what I’m going to do once I get there,” she said, but that’s part of the adventure.

Ms. Amo has been traveling for most of her life.

Her mother, Heidi Broome, lives in St. Petersburg, Fla., while her father, Peter Amo, lives in Heuvelton. She spent a significant amount of time flying up and down the East Coast during her childhood.

In college she studied abroad in Australia, where she caught the travel bug for good.

“Once I came back from there I saw there was so much more I could do. Every little thing was exciting, and when I came home everything was just the way it was when I left,” Ms. Amo said. “Once I came home from [Australia] I realized I just wanted to leave.”

After spending roughly nine months saving money after college, Ms. Amo sold her car, gave everything she couldn’t carry with her to her sister and has been on the move since with no plans of slowing down.

“I promised my family I would come home after two years,” she said, though when she does return in December, she said doesn’t plan on staying put more than a month.

“I want to travel in the States and end up in Alaska,” Ms. Amo said. “I don’t see myself stopping anytime soon.”

For her, traveling is about new experiences.

“You meet so many new people and you’re always doing new things,” Ms. Amo said. “There’s always a stranger waiting to help you out, to become your friend, to keep you company. It’s always fun. You never get bored.”

She hopes to spend time traveling in Southeast Asia and Europe at some point, too, she said, though because she funds her travels working minimum wage jobs, it’s important for her to be able to get work visas.

Ms. Amo said she does her best to stay in touch with friends and family in the United States. Skype, the online communication tool, has been especially helpful in keeping her connected with people back home, though time zones sometimes make communication difficult.

When she gets home from work it’s often too late to talk to anyone at home.
One of her hopes is that friends or family members will join her for short legs of her travels. So far only one of her friends has taken her up on the offer, “but I’m not giving up,” she said.

And Ms. Amo wants other people to be inspired to travel as well.

“It’s really easily if you’re focused and determined to do it,” she said.

Needless to say, I have learned my lesson when it comes to letting someone else write about me. I didn’t have high expectations going into this interview – I was mostly disappointed that they wouldn’t print the story I had written myself – but I was at least hoping to stay awake while reading it. I’m not sure how this article made it to print in its current form, but the reality is that it happened. Anyway, you just have to roll with the punches.

Thankfully, my tbt* front page article has helped me keep my faith in the field of journalism. They did a great job presenting my story and they even lent my adventure a little extra hype. I never imagined I would be on the front page – I never imagined they would include photos and captions – I didn’t expect to be paid. I just wanted them to run me somewhere in the last few pages so my family could put a cut-out of my article on the fridge back home. Of course, the tbt* went above and beyond, as their reputation would suggest. On the other hand, that unexpected coverage gave me a whole new perspective on being in the eye of the public.

After my article was published in the tbt*, there was a lot of feedback to follow, and most of the public stuff was pretty negative. I found it absolutely wild that people felt so compelled to size me up – on a personal level – based on an 800 world article. People addressed me by my first name, saying things like, “Well, surprise, Tiffani – some people actually do [travel] but manage to make the trip a little more meaningful.” This mean-spirited army mom then went on to attack my personal character by saying my “condescending attitude toward those who do not follow in [my] footsteps says volumes.” Essentially, some stranger took my care-free, no-guts-no-glory, inspirational article and deduced from a few paragraphs of text that my experiences amounted to nothing more than “one long vacation.” She spent the rest of the letter writing about her daughter’s own travels, who “managed to make the trip more than just about herself.”

I wished desperately that I could have responded to this old bat’s crank, but I refrained. While her hypocritical rant begged for a reply, I had to just cop it on the chin and let it fall by the wayside. It wasn’t hard to do. Being that I’ve never met this lady. and she doesn’t know me, it was pretty easy to laugh about it. When it comes to the public, you just have to accept it: haters gonna hate.

Of course, ole Debbie W of Wesley Chapel wasn’t the only Floridian sipping that haterade. A letter from a woman from Clearwater shared the page with Debbie W the next morning. This former world traveler was quick to point out that traveling is about more than just being able to “sell your possessions and ride off into the sunset.” The rest of the letter was about her own personal sacrifices – saying goodbye to her childhood cat and missing her grandfather’s funeral. This one had me throwing my hands in the air. I wanted nothing more than to tell Katrina that in fact, I have actually written a pile of articles about the sacrifices and the hardships of life on the road, but that this article – the one that got published – just happened to focus on the inspirational side of things. Interestingly enough, I really did said goodbye to my own childhood pup, and I found out about the passing of my grandmother while I was thousands of miles from home. I am no stranger to these realities.

At the end of the day though, I held my tongue. Even when some dark-hearted Facebook fiend posted a nasty comment on the internet, yet again attacking my personal character, I refrained from responding and watched the debate unfold before my eyes while complete strangers lashed out at me for being a spoiled little twat. All of these people who have never met me, who completely missed the vibe of my article, who were rallying so much anger and causing much ado about nothing. It was an interesting concept. I wondered how many times I have done something similar in the past? I certainly don’t want to find myself in that mind-set ever again. It’s embarrassing to admit, but I’m sure I’ve sized a lot of people up in the same way, making harsh assumptions and critical judgments with very little grounds.

Of course, I still got a lot of positive feedback – most of it via personal e-mails and messages – the negative feedback was absolutely invaluable. In the future, I think I will be much more cautious when it comes to forming opinions based on media coverage. I think it would do everyone some good to end more of their shared thoughts with question marks rather than exclamation points, to replace assumptions with inquiries. At the very least, it’s a reminder that sometimes, it’s just not worth getting your panties in a bunch.

So first off I would like to commend you for your bravery to do what you did!!! I think there are three main types of travelers: Those that go for a vacation, those that go for work and then there are the ones like you and I which go for the experience and adventure of learning about new and different places as well as themselves.
This was taught to me by a former military now college professor I recently had. He planted the seed in my head for me to be brave and do what you are doing. I recently graduated, yet again in April and come September I am setting out to Europe not really sure where I am going or what I will be doing. With the help of this professor and reading your article in TBT I am excited to see what the world holds for me.
The first time I went abroad for a long period of time I was scared and unsure of what I was leaving behind or what I was coming back to for that matter. My mother put it to me this way, “We have planes, trains and ships for a reason.” That being said I would not worry about the people that do not feel the same way about travel as you do.

You absolutely crack me up. I have recommended your blogs to alot of my friends. To each his own, right? luv ua