Spiders. If youâ€™re an American, I probably just made you uncomfortable. Add to that, â€˜Australianâ€™ and youâ€™re probably now thinking about 8-legged, bird eating, aliens and subsequently equating them with death. On the other hand, if you arenâ€™t currently cringing and involuntarily touching the back of your neck, weâ€™re either on the same level or you just donâ€™t fully understand the creature situation in Australia.

You see, in Australia, there arenâ€™t really a lot of big, scary predators running around eating people (on land). Well, there are exactly none â€“ unless you believe the Tasmanian tiger is still roaming around. There is however, a large army of reptiles, arachnids and sea-dwelling things that will haunt your vacation-planning dreams and potentially put you into a coma or an early grave.

On the other hand, if youâ€™re Australian, your travel dreams are more likely to be haunted by orange-colored cheese, man-eating grizzly bears and 40oz cups of drip coffee because you are likely un-phased by these infamous Australian creatures, especially the snakes and spiders (though plenty of Aussies are afraid of the sea monsters). Itâ€™s actually something I donâ€™t understand because I would safely bet that nearly every Australian can name at least one person, likely including themselves, who has survived a deadly snake bite, had a run in with an unfriendly jellyfish or been on the losing end of a battle with a spider. Youâ€™d think it would make you more wary, but the â€˜Sheâ€™ll be rightâ€™ outlook is sewn deep into their psyche.

For example, Alexâ€™s grandfather (who he calls Grandad) was bitten by a Dugite that he mistook for a skink trapped behind the fridge (in the dark), which he then proceeded to kill with an ice cream container and carry with him to the hospital. Surprisingly enough, it wasnâ€™t the snake venom that nearly killed him but the antidote. Grandad has also been bitten by two pythons.

Alexâ€™s Uncle Snorkel was bitten on the ass by a Death Adder. His father was blanketed in a Portuguese Man of War. Alex himself has been bitten by a Redback, which is a close relative of the Black Widow. (Mind you, Alex has also received rabies vaccinations for an unfriendly raccoon encounter and has even been attacked by a pelican.)

I guess this sounds a little treacherous when you think about it, but everyone ended up okay. Because, you know, sheâ€™ll be right!

And this actually works for me because I love pretty much every creature on the planet and my interest tends to outweigh my caution. I do think anacondas are very intimidating and seeing a real one at the zoo gives me the absolute creeps, but I donâ€™t hate them or anything. I do hate cockroaches. Well, I hate the brown, shiny, crunchy ones that crawl across your face while youâ€™re sleeping or surprise you when you open a cupboard. Native Western Australian cockroaches however, I do like, because they are very pretty and they have a nice pattern with good colors and theyâ€™re so flat and soft looking. I donâ€™t like â€˜earwigsâ€™ though.

But I digress. The point is that some people are afraid of deadly snakes and not everyone likes soft looking cockroaches, and thatâ€™s okay. The problem though, is that whenever anyone in America gets on the topic of Australian wildlife, aside from discussing the more infamous animals, they seem to spend so much time oohing and ahhing over bouncing kangaroos and half-rabid koalas being treated for chlamydia that they forget to ask about Australiaâ€™s real sweethearts.

Who are these forgotten sweethearts? The slithery, scaly things of course! You probably thought I was talking about the more furry and feathered things â€“ like wombats and kookaburras, or maybe the platypus. Or how about the crazy emus? They are absolutely hilarious. (I once counted 37 of them on a road trip â€“ each one completely ridiculous.) Plenty of other colorful, noisy birdlife too â€“ birds that fly and sing, like the little willie wagtails, the colorful cockatoos and the noisy magpies that sound like raptors from Jurassic park. Plus all of the kelpies and heelers running around at the dog park. And I do love the possums. (To be clear though, Australiaâ€™s possums are not like our rat-nasty North American opposums. Ours are haggard where as Australian ones are pretty much adorable.)

But Iâ€™m not saying I donâ€™t actively stare at kangaroos â€“ because I do. I love them whole heartedly. But I also love all of the other stuff, including the slithery, scaly things. In fact, I prefer the slithery, scaly things. And it actually hurts my heart to think that nobody ever asks about the friendly blue-tongued skinks who love munching on bananas, dandelions and grasshoppers in the sun. Or the precious, tiny scorpions with their tiny, curly tails. Or the handsome Huntsman spiders who decorate the walls and ceilings. The stunning tiger snakes, the happy frilled necks, the adorable thorny devils, the sly monitors, the cheeky King skinks, the velvety geckos, the waving ta-tas, the timid water dragons.

I can genuinely say that my favorite thing about Australia is itâ€™s diverse and magnificent population of reptiles, specifically lizards. But thereâ€™s a little bit of bought vs brought going on when it comes to Australiaâ€™s lizards. Hereâ€™s what I can tell you â€“ four-legged things are lizards (though also sometimes legless, but thatâ€™s not what you should focus on). From there, they become skinks, montiors, agamas etc.

So for the record, blue tongues are from the family Scincidae. Theyâ€™re skinks. As mentioned, theyâ€™re also lizards â€“ as are all animals ordered Squamata â€“ but they are, more specifically, skinks. Also, the nickname Goanna is really supposed to apply to monitors, which are not skinks but are, again, also lizards. Iâ€™m actually sharing this so that I can mentally lay it to rest rather than to complain.

Anyway, Australia is home to a whole lotta lizards so fair enough if people get confused (unlike the inexplicable confusion between bought and brought). The two lizards I spend the most time with are blueys and King skinks. The blueys are sweet and slow, and I usually end up helping them cross the road by gently picking them up and laying them in a patch of bush. The King skinks are feisty, fast and kind of like Toothless from How to Train Your Dragon. 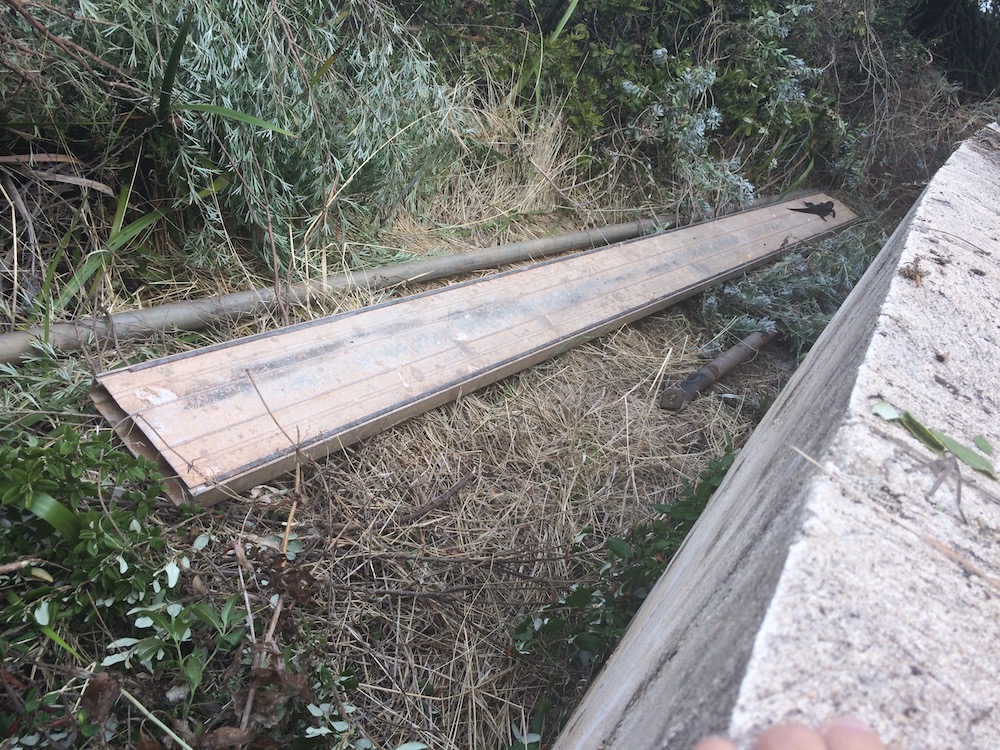 One of my favorite wild pets here is actually a tiny King skink who was born and raised in our RAD (reptile attracting device, or more specifically, a long piece of hollow scaffolding metal that heats up nicely in the sun) that sits outside the bedroom window.

I held this little guy just after he was born and watched him grow into a little menace. He was one of about a dozen babies to hatch from the multi-generational family living in the RAD, but he had a very distinct personality. He was the only one who ever tried to bite me when I picked him up and his eyes were kind of fiery and red even though everyone elseâ€™s eyes were pure black. I called him Boss Baby because he was obviously the boss of the other babies. Sadly, I moved to a new location and havenâ€™t seen Boss Baby in over a month, but I know in my heart that heâ€™s living a life he loves.

Thereâ€™s also the bluey who lives on the Rails to Trails bike track. I fed him grasshoppers and dandelions out of my hand one day, and when I sat on the ground to observe him, he crawled under my legs and rested next to my feet. He bit Alexâ€™s shoe on his way over. A few weeks later, Mother in Law showed me a photo of a skink she saw on her bike ride, and I told her it was my favorite bluey. She didnâ€™t believe me though. She said, â€œHow can you possibly know? They all look the same.â€

So, I got my phone out and pulled up some photos and showed her the markings and more specifically, the precious facial expression. Alas, she realized that it was in fact the same bluey, and turns out she saw him in the exact same place.

Before I go down a rabbit hole of lizard stories though, I also want to say that the spiders here are also sweeter than you might think.

I wonâ€™t go into too much detail about the cutie jumping spider living next to my keyboard or the daddy-long-legs babies that hatched in my bed. Twice actually. After the first time, I was supposed to report all daddy long leg sightings to Alex so he could relocate them, but I felt bad kicking them out, so I didnâ€™t report them. And then babies ended up in our bed again â€“ crawling all over our pillows – so then Alex had to get the vacuum and that was the end of my indoor spider habitat.

Plenty of quiet Huntsmans running around though, and they were too big for the vacuum â€“ catch & release only. Thatâ€™s because these guys are often the size of a human hand. I tend to think the bigger the better because theyâ€™re better for inspecting, but if youâ€™re not into spiders, seeing one of these guys casually pressed against the ceiling directly above your forehead might be slightly alarming. (Just take a breath, and keep walking Brit!)

I like them though. When I first got here, I was so excited to see them creeping around, but then I kept seeing dead ones all over the place, and it was really weighing on me. Until one day when I was inspecting a dead body and I realized that it wasnâ€™t a corpse at all but a skin skeleton. As it turned out, they werenâ€™t dropping dead â€“ they were just growing and shedding. What a relief, right?

Actually, I think most of you will not relate to anything Iâ€™m saying about these precious not-so-little spiders, and thatâ€™s fine. I get it.

Ultimately though, I just donâ€™t think Australia gets enough credit for its truly unique creatures. Like the other day, I was on a hike and we came across these â€¦ slug casings sticking out of holes in the ground. Like from the movie Tremors, but they were obviously smaller. We called them â€œSand Dicksâ€ because they looked like little penises coming out of the sand. Turns out they were some kind of weird grub hatching out of eggs in the ground and digging to the surface to turn into giant moths (and I did see a giant moth but he was nearly dead). Itâ€™s pretty cool the things you discover here.

But I suppose I can say the exact same thing about any place on the planet. Still, next time Australian wild life is the topic of discussion, just donâ€™t forget about the blue tongues and King skinks, okay?