DISCLAIMER:Â Read this only if you can handle knowing that Shit gets REAL. Also, stay tuned because soon I’ll be postingÂ a tentative schedule for new topics & series ideas to help everyoneÂ better understand what I’m trying to do here. In the meantime, read, enjoy, pee your pants laughing, secretly identifyÂ – whatever.

Toilets are not things that particularly interest me, but for some reason, a number of my friends and family members have questioned me about toilets in Australia. Everybody wants to know, â€œWhen you flush, does the water spin the other way.â€

Usually this is an inquiry meant to illicit laughter â€“ a reference to The Simpsons â€“ but more often than not, thereâ€™s a follow-up. Typically itâ€™s a display of knowledge and serious inquisition. â€œWell, you know itâ€™s the opposite side of the world, so it should spin the other way. Does it?â€

First of all, Iâ€™d be taking a 50-50 guess to know which way toilet water flushes in America because watching toilets flush has never been a hobby of mine.

Secondly, if and when I do happen to catch toilet water leaving the bowl in Australia, it doesnâ€™t appear to be spinning in any direction. Itâ€™s more of a gushing waterfall effect, and I have ZERO interest in closer study to make a distinction.

My point is, I could probably answer the question, but Iâ€™m not gonna. Ever.

What I will tell you is this: Australian toilets are definitely different than American toilets. Here’s why …

In Australia, you go to the toilet, not the bathroom or the restroom. This is reflected in both the spoken language and the signage everywhere you go. It used to gross me out, but it was unavoidable. Whenever I would politely ask to use the restroom or the bathroom, all Iâ€™d get was a blank stare. Then I would have to awkwardly clarify that what I needed was a toilet. These days, toilet is just as normal a word as any and it actually gives me a little twinge of satisfaction every time I say it in front of an unsuspecting American.

On the other hand, calling a toilet a dunnyÂ is still something that doesn’t sit well with me. You see, in Australia, toilets are also called dunnies, but itâ€™s kind of informal and I think itâ€™s supposed to refer to more of an outhouse. Itâ€™s something you mostly seem to hear from the tradies, a.k.a. construction workers. So take that how you will, but basically itâ€™s a slang thing and itâ€™s gross. And yet, due to sheer overexposure, I still catch myself saying it every now and then, and it always makes me feel dirty.

And speaking of dirty, I need to quickly mention the lingo revolving around The Acts themselves. For example, what I call peeing and pooping is politely referred to as weeing and not weeing by my Australian mother-in-law and is otherwise known to my sister-in-law as chucking a piss and doinâ€™ a poo. On the other hand, when you get on the piss in Australia, that actually means youâ€™re getting shitfaced in the universal sense, so as you can see, itâ€™s not always easy to keep up with all the shit talk. See what I did there? Butt wait, thereâ€™s more â€¦. lolz.

Thankfully Australian toilets are far easier to use than to talk about. You see, in Australia, the common toilet is a bit more advanced than in America. First of all, Australian toilets give you 2 flushing options: A half-flush (for chucking a piss) and a full flush (for not weeing). Depending on your business transaction, you make your flush selection by pushing the corresponding button and the appropriate amount of water dispenses. Personally, I love this because I give water conservation a big thumbs-up.

Which brings me to my next point about functionality: There is a significantly small amount of sitting water in Australian toilet bowls, especially when compared to the bountiful supply in American toilet bowls – yet another great feat of water conservation. For an America-to-Australia conversion, this isnâ€™t really an eye-catcher, but for Australians using an American toilet, itâ€™s a shocking revelation.

Why? Well I happen toÂ know a particular Australian bloke who, after making serious use of an American facility, went in for a bum-clean and came out with dripping, shitty, wet knuckles. I think it even happened to him more than once during his visit to America, and I would be inclined to say that heâ€™s not the only Aussie to mistakenly dip his appendages into Americaâ€™s high-waterÂ toilet bowls.

But when it comes to logistical mishaps, Iâ€™d have to say that residential Australian toilets take the cake with their shitty spatial orientation.

Public toilet layouts are pretty normal, although most tend toÂ beÂ glorified drop toilets no matter how urban the terrain. On the other hand, residential toilet layouts are usually pretty awful.Â Maybe youâ€™ve heard the English (or whatever) term water closet? Well, it’s obviously derived fromÂ a floor plan because in Australia, residential toilets are quite literally kept in closet spaces. Meanwhile, the shower, sink and bathtub counterparts occupy a separate area. The separation is a good idea in theory, and weâ€™ve adopted this in America as a half bath setup, which is great because sometimes all you need is a toilet and a sink. On the Australian front though, itâ€™s more of a one-fifth bath setup.Â Think Iâ€™m exaggerating? Think itâ€™s not a big deal?

Imagine yourself at an acquaintanceâ€™s house-warming party about to shit your pants thanks to last nightâ€™s homemade curry dinner. You ask for directions to the toilet, and your host tells you, â€˜Down the hall, first door on your left.â€™ You walk down the hall at a painfully normal pace, clenching both butt cheeks, and you push open the first door on your left ready to breathe a sigh of relief. And then you realize youâ€™ve opened the door to a broom closet that has mistakenly become the storage space for a toilet. 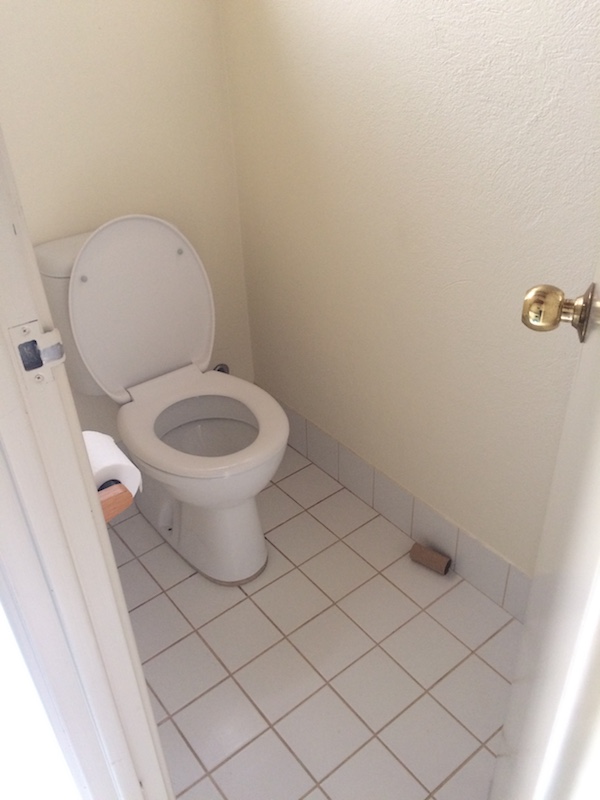 In this broom closet, in addition to the toilet, thereâ€™s a small clearing of tiled flooring with a weathered stack of old magazines in the corner, four blank walls and a textured ceiling. If youâ€™re lucky there might be a window or a fan vent, but sometimes itâ€™s just a plain, old, shoebox.

Anyway, as youâ€™re closing the closet door, you glance up just in time to make eye contact with another guest settling in against the wall, securing their place in line to use the toilet next.

And now here, in this claustrophobic closet with finite airspace, mere feet away from another party guest, in this space too small to become a human starfish, you are left to take care of your private business. And then when youâ€™re done, youâ€™ll exit the closet without washing your hands and search for a nearby sink. Sometimes you find one, but sometimes you just have to avoid eye contact with everyone at the party so you can speed-walk your way to the only wash basinÂ youâ€™ve seen all night, which is in the kitchen where youâ€™ll have to get the dish soap out from under the sink because not all Australians have heard of hand soap. (Australians, out of genuine curiosity, I would love to know, at this moment, how many of your kitchen sinks are equipped with readily available hand soap. This is not sarcasm – I sincerely cannot tell if this is simply a personal thing that I’ve haphazardly been exposed to many times or if it’s a cultural norm.)

On rare occasions, you might encounter a normal bathroom with a toilet and a sink and air to breathe, but for some fucked up reason, claustrophobia is the preferred floor plan for the predominant number of residential Australian toilets.

I honestly just donâ€™t think itâ€™s too much to ask for a toilet to be accompanied by a sink and a bit of legroom. I understand that it’s a way to save space to make a little extra room forÂ more exciting areas of your home, but bathrooms are kind of important. Not really a place to be cutting corners.

And maybe Iâ€™m a bit prude, but I would prefer a little less transparency and a bit more discretion when it comes to whatâ€™s going on behind that door. I mean, when youâ€™re at party, you donâ€™t expect the guests to be taking showers, but isnâ€™t it nice to think that the girl who went in beforeÂ you is fixing her hair and makeup and washing her hands and not just shitting for 10 minutes straight? For fuckâ€™s sake, I think this is a reasonable request thatâ€™s in everyoneâ€™s best interest.

But nowÂ this topic is turning into a bit of a bummer, so I think we’ll end this here.Â Thatâ€™s kind of all the shit you need to know about Australian toilets anyway.