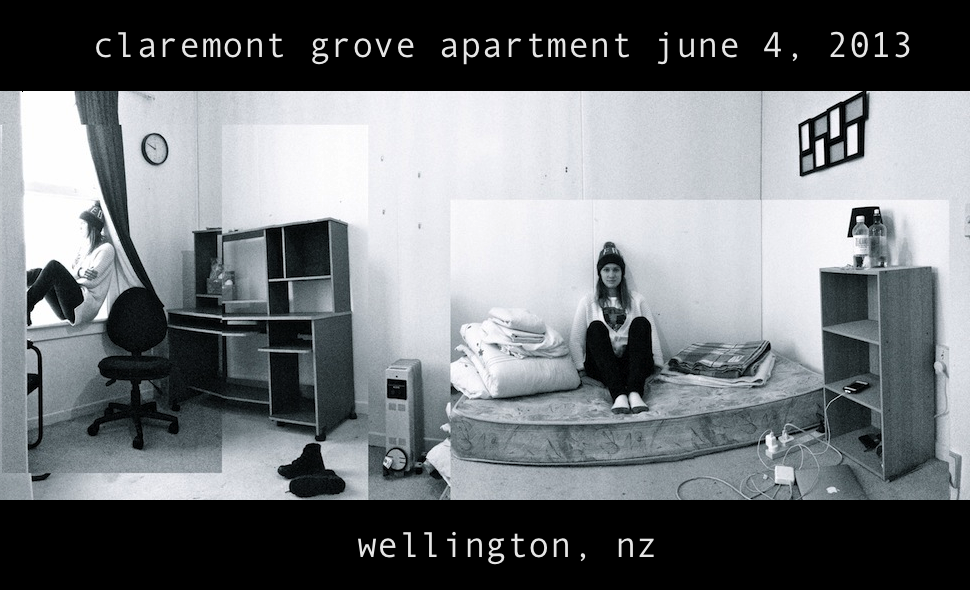 My days in Wellington are numbered. For three months I have filled my days working at little ole Olive Cafe in Wellington. Pinching my pennies and selling myself short, I now have a pile of coins tall enough to send me packing again. This was no easy feat. I was cutting corners and making sacrifices on all fronts.

A big money saving venture has been food, or a lack thereof. My diet has almost entirely consisted of moldy, slightly edible groceries left in the fridge and whatever scraps and staff meals I’ve managed to scrounge up from work. More than a handful of times I have choked down some soggy vegetable or cold lump of meat at home and worried myself to sleep with visions of salmonella and ebola thriving in my small intestines. Forget about restaurant menus and takeaway containers – those have been few and far between.

I’ve also been traipsing around town wearing garbage bags and crotchless pants. Okay, maybe not totally crotchless pants, but I did have to wear plastic bags in my hand-me-down size 8 (I’m a size 6) secondhand boots when it rained because the souls were torn apart and the seems were splitting open. My colleagues guilted me into buying a new pair last week when I showed up in my fancy footwear and my presence in the workplace was a mild embarrassment. My new shoes are awesome, but I’m still sporting all sorts of tattered pieces of clothing that I mooched from my roommate’s good will pile: jeans with broken zippers, missing buttons, thread-bare bum and knee areas. I’ve also bee rocking an array of fraying t-shirts and tank tops, as well as itchy sweaters and faded leopard print undershirts – exactly the kind of shit that makes me cringe when I see other people wearing it. I think my lowest point has been wearing hand-me down socks.

Anyway, I’ve also saved a boat-load of money by becoming a hermit. A joke at work when my shift is over is to ask me what I’m doing for the rest of the night, and then to say “Have fun working on your website!” But sometimes I watch MTV’s Teen Mom on the internet or read a book. I sleep. All of those things are free. I’ve been out on the town one time in Wellington so far, and I spent 20 dollars. It was enough for me to black out and show up late for work the next day. The only other time I socialized was at a staff party where the booze was on the house. Of course, I did have a one week holiday when Alexander James came to visit over Easter break, but other than that, I’ve been hard at work and determined to save some money. Now, my servitude is nearly over.

In just a few days – in the company of Alexander James who has just arrived from Australia – I’ll be saying farewell to Wellington and heading north. In the past 19 months, the longest I have remained in one city has been the four months I spent in Hobart, Tasmania – once again on a mission to work and save as much money as possible in order to fund my next adventure. I came to Wellington intending to break that four month record, but it just ain’t gonna happen. I’m ready to get gone again!

When I came here, my goals were simple. I wanted to come to New Zealand as a lone wolf and fend for myself. I wanted to see if I could handle it. When my bank account dipped below 700 bucks, I got nervous, but that was the worst of it. I learned my way around, got myself a job and a place to live – I landed on my feet. Now that I’ve proved that I am fully capable of a solo venture, the thrill of simply surviving has waned.

Of course, the other reason I wanted to come to New Zealand all by lonesome was so that I could focus on my writing, my photography, and my website. I have since made the cover of the Tampa Bay Times (tbt*) and had an interview article published in the Ogdensburg Journal (not the most articulate article ever written). I’ve gotten a lot of exposure for my website via New Zealand endeavors and coverage back home, and I’m currently waiting for the final word on some photographs to be printed in a magazine. I feel like I have done exactly what I set out to do. Once again, the thrill of simply flying onto the radar has ebbed. Time to take the next leap.

My time in Wellington has been well spent. For all of the progress I’ve made financially and semi-professionally, there were still a lot of precious little Welly moments that I won’t soon forget. I will surely miss the city library and all three levels of its splendor, not to mention the waterfront where I brushed elbows with Jermaine from Flight of the Conchords. Oh, and lets not forget the time I actually met Bret (also from Flight of the Conchords) or the time Bilbo Baggins ordered a tomato juice from me. A highlight that I’ll cherish forever – seeing my first wild tuatara at the Zealandia sanctuary. I might even be prone to little pangs of nostalgia when I think back to the annoying bucket fountain on Cuba Street, splashing water (and occasionally prankster soap suds) across the walking path every day. Oh and I’ll miss my little creature friend Bear Cat too. This mangy feline used to roll around at my feet and meow like a kitten when I passed him every day on my way to and from work. He was a good critter.

What I won’t miss is trudging to and from work in the freezing cold, pissing down rain. I remember the first time I saw an umbrella sticking out of a trash can. I laughed to myself and thought, “Somebody must have been having a bad day.” A few months later and I’ve become that person, swearing at my inside-out, upside-down umbrella and leaving the useless piece of junk in the gutter. It’s all part of Wellington’s charm.