My Australian mother-in-law says American bacon tastes like plastic. We disagree about this because I happen to know that American bacon actually tastes like something Jesus would cook himself for breakfast if he were real. Alternatively, I can tell you what fake Jesus would definitely NOT eat for breakfast, and that’s the warm ambiguous meat shapes that Australia tries to pass off as bacon.

Hereâ€™s what happens when an American eats bacon in Australia.

You go to a restaurant for breakfast. You order the Classic Brekky, not only because you like the way the name soundsÂ but also because it will satisfy your primal breakfast needs: 2 eggs, 3 rashers of bacon,Â 1 piece of multi-grain toast and some other fancy Australian bits and pieces to dress it up and make it feel like you’re on vacation.Â What they serve you are eggs, toast and fancy stuff with a side of gently heated, oddly shaped pieces of thick-sliced ham that are less like bacon and more like the actual definition of lunch the day after Christmas.

You assume that this was a one-off freak accident. The butcher was on acid when he supplied the bacon-labeled meat to the restaurant. The chef blacked out when he cooked it. The server who brought it out was blind. In uncanny sequence of events, they mistakenly served you chunks of warm ham instead of strips of bacon. Okay, shit happens. Your Australian husband is happy to eat your leftovers, as usual.

Next time you go out for breakfast, youâ€™re in a different city (shoutout to Perth!) at a different restaurant so you donâ€™t think twice about ordering the Big Brekky, which is basically a jumbo version of the Classic Brekky. ButÂ then two rounded slices of warm, raw deli meat show up on your plate where the bacon should be and you experienceÂ Christmas ham dejavu.

Noticing the sour look on your face, your Australian brother-in-law offers to eat the raw deli meat, which gives you an opportunity to improvise. You politely ask the server forÂ an extraÂ side of bacon but you add one clever request, a go-to problem-solver for unsatisfactory bacon: crispy please.

But instead of just applying a little more heat to the meat, what they actually do is rub the meat in charcoal and then serve it to you as if thatâ€™s totally normal, as if when you said make it crispy in your confusing American accent what you really meant was light this on fire and rub it in the residual burn-off becauseÂ I’m a crazy AmericanÂ and I like my food to beÂ inedible.Â (Seriously though, raise your hand if you’re an Australian who finds the American diet fascinating and comical. Well, newsflash, we don’t eat charcoal, so pass it on.)

Your next breakfast outing is a few weeks later on the opposite side of the continent (hello, Melbourne!), but at this point, you are wary of AustralianÂ bacon. You opt for a Veggie Brekky and add a side of bacon to play it safe because you don’t want to go hungry if things go sideways. It’s not aÂ cost effective choice because sides of bacon do not come cheap in Australia (nothing does), but you can’t put a price on happiness so the expense is justified.

When you order the side of bacon,Â you also never utter the word crispy.Â You simply ask for the chef to please cook it just the tiniest bit extra, and you hold up your thumb and pointer fingers as if you are squeezing a Q-tip to emphasize the words tiniest bit extra.

Your Veggie BrekkyÂ comes outÂ lookingÂ like a Nigella Lawson creation. A sense of optimism and relief washes over you.Â AÂ few minutes later, yourÂ server comes back and places a wedge of hot mystery meat in front of you. Without hesitation, you pickÂ the plateÂ up and look around the table, leaning forward and making eye contact with anyone who glances your way in an effort to see whose order you’re mistakenly holding. With no takers, it hits you -Â this chunkÂ of pale pink flesh is your side of bacon. Not pieces or strips. Not even a hint of ham. Just an indistinct meat doorstopper.

Instead of eating your breakfast, youÂ turn to Google for answers. It becomes immediately apparentÂ that bacon is actually a really complicated subject. You determine that good bacon is streaky bacon and that you should avoid rashers. 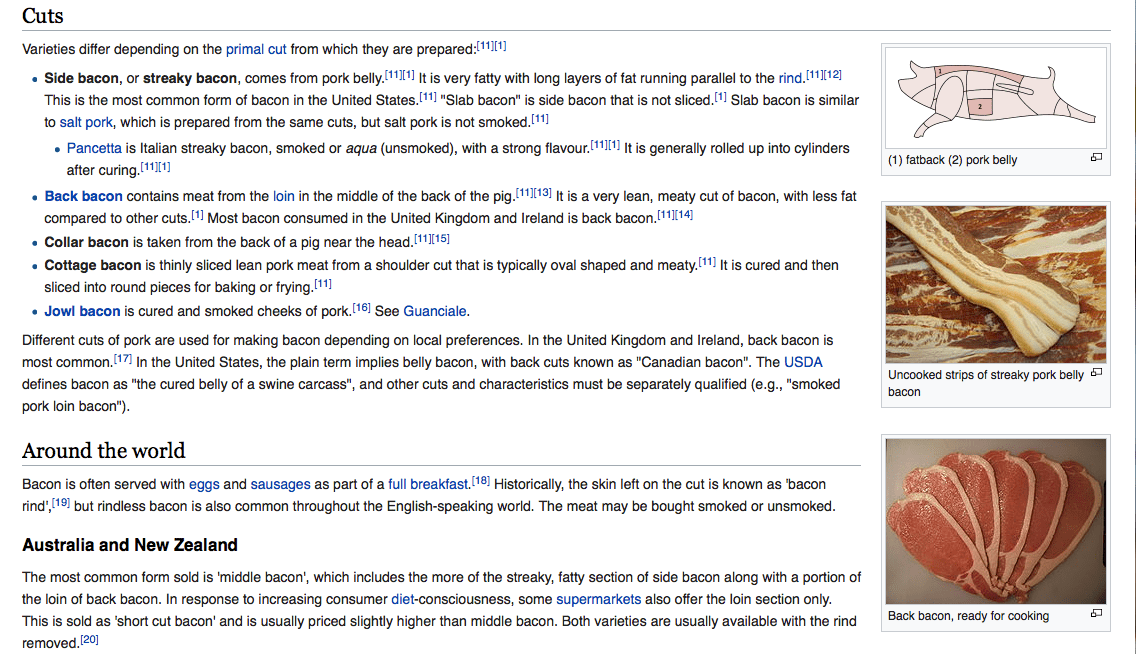 You apply this newfound knowledge duringÂ your next breakfast outing.Â You order eggs. You ask about the bacon. Which cut? What shape? How many slices?Â How thick? Â TheÂ answers satisfy your criteria, so you order the bacon.

Your plate comes out piled high with scrambled eggs and dog meat.

You quickly reach across the table for the water jug at the far end and your oppositeÂ elbow violentlyÂ knocks your untouched breakfastÂ onto the floor. You give the server a half-hearted apology and orderÂ granolaÂ and yogurt as an easy replacement. And then you weep because even theÂ theoretical application of ordering bacon is flawed. And your Australian friends all laugh because they donâ€™t get it. They do not understand bacon. Theyâ€™re happy with their weird, slimy, slabs of warm ham for breakfast.

Right then and there, you vow never again to order bacon when youâ€™re out for breakfast because itâ€™s a waste of money and emotions. Breakfast has now become your least favorite meal for dining out anyway. So you take matters into your own kitchen,Â and you start with a trip to the grocery store.

You march straight to the deli. You are going to treat yourself to the finest cut of bacon this grocery store deli has to offer. But the finest cut is not fine at all. In fact, thereÂ is only one kind ofÂ bacon resting beneath the glass and fluorescent lights, and it’s notÂ peppercorn rubbed or maple cured. It’s just a pile of unidentifiable flesh slowly rottingÂ behind a white, plastic placard that reads ‘bacon’ in lowercase letters.

You speed walkÂ to the packaged meat section. Your eyes carelessly scan the pathetic assortmentÂ of wrapped up chunks of deli ham with no hope of finding treasure. But then, you see it – a diamond in the rough, a small packageÂ that reads, in plain English, Streaky American Bacon. It even has a little American flag on the label. There are only 4Â packages of this bacon on the shelf, so you buy them all.

It’s 10 a.m. when you get home. You’ve already had a bowl of cereal for breakfast today, so you decide to have eggs and bacon for brunch. You track downÂ the biggest frying pan in the house, you rip the nearest packet of bacon open with your teeth and you dump every single slice of streaky American goodnessÂ into the pan at once. It crackles and sizzles and pops. The grease starts to pool. Doesnâ€™t quite smell like bacon, but no worries mate because things are really looking up.

You finish cooking the bacon, pile it onto a plate and sit down at the table. TheÂ eggs are still in the carton in the fridge. With a quick drag of your forearm, you wipe away the thick layer of saliva runningÂ down your chin butÂ the foam collecting at the corners your mouth remains. You select a single piece of bacon from the pile and hold it gingerly between your fingers. You part your lips slightly and lean forwardÂ to pullÂ theÂ strip of bacon into your mouth with your tongue like a well-trained dog taking a treat.

You bite down. There is a little crunching sensation between your teeth. Your mouth fills with spit. You let the broken bits and pieces rest on your tongue without any intention of swallowing. You want to savor this flavor. And it tastes â€¦ okay. Itâ€™s not great. Itâ€™s actually not even that good. Itâ€™s just okay.

So you grab your plate with both hands, straight-arm it over your head, and throw it directly into the wall with the vocal aggressionÂ of Serena Williams.

And thatâ€™s what itâ€™s like for an American eatingÂ bacon in Australia.