The funnest piles of rubble you will ever encounter, Arches National Park is like an art gallery you can climb on. Not only do these martian red rocks make for some extraordinary eye candy, but they’re also laid out like a giant playground. Of course, we did probably break a few rules – quite possibly every single rule they’ve put in place – but like I’ve said before, rules are made to be broken. Also, I believe Arches is where the Flintstone’s lived. Very accurate depiction of their neighborhood if they happened to be from Utah. Just saying.

The first few miles of the park were surreal, but this had little to do with the rock formations. Basically the main drag of Arches is an 18-mile road that winds through the park with convenient parking lots and view points at all of the popular formations. Seeing hundreds of camper vans and tricked out 4×4 vehicles cruising around like ants against a backdrop of alien rocks and snowcapped mountains was mind bending. 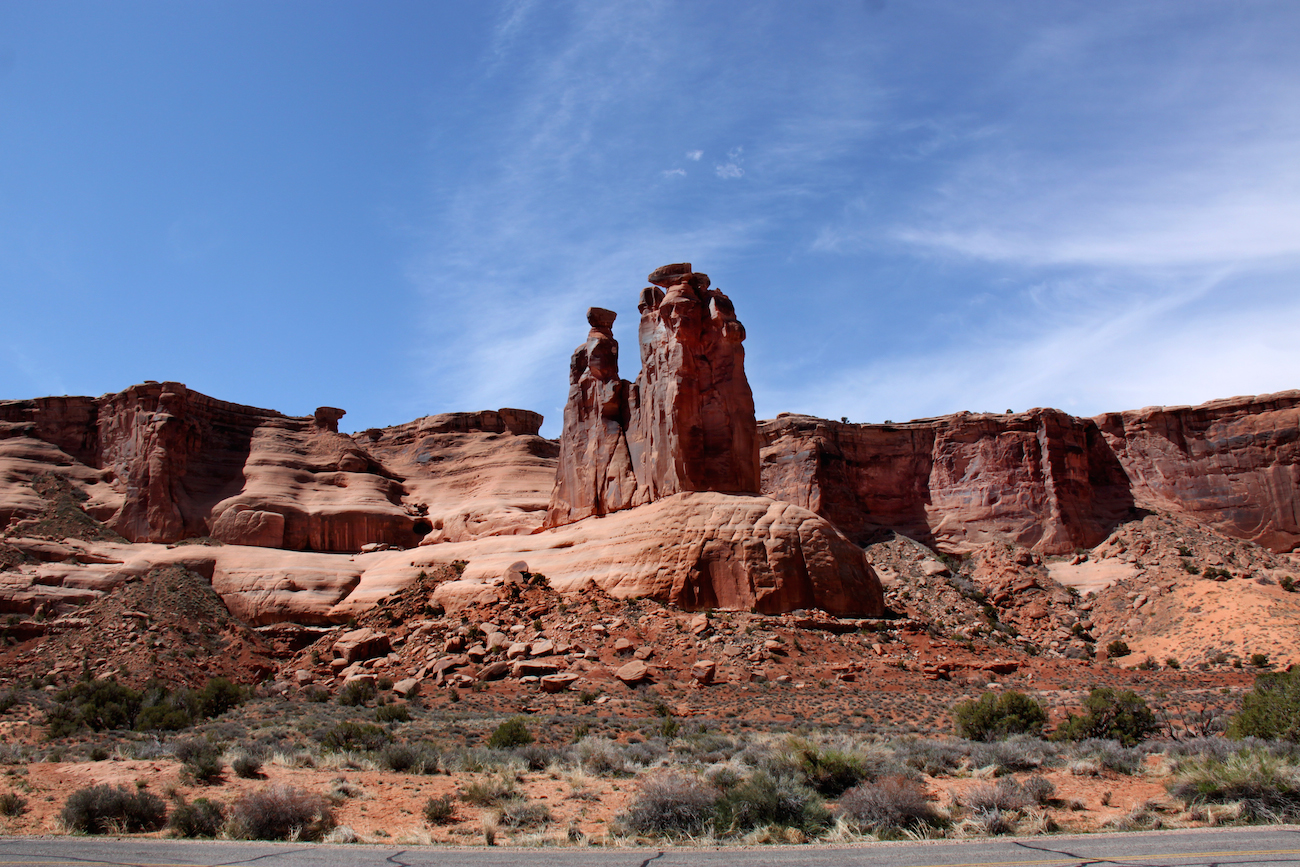 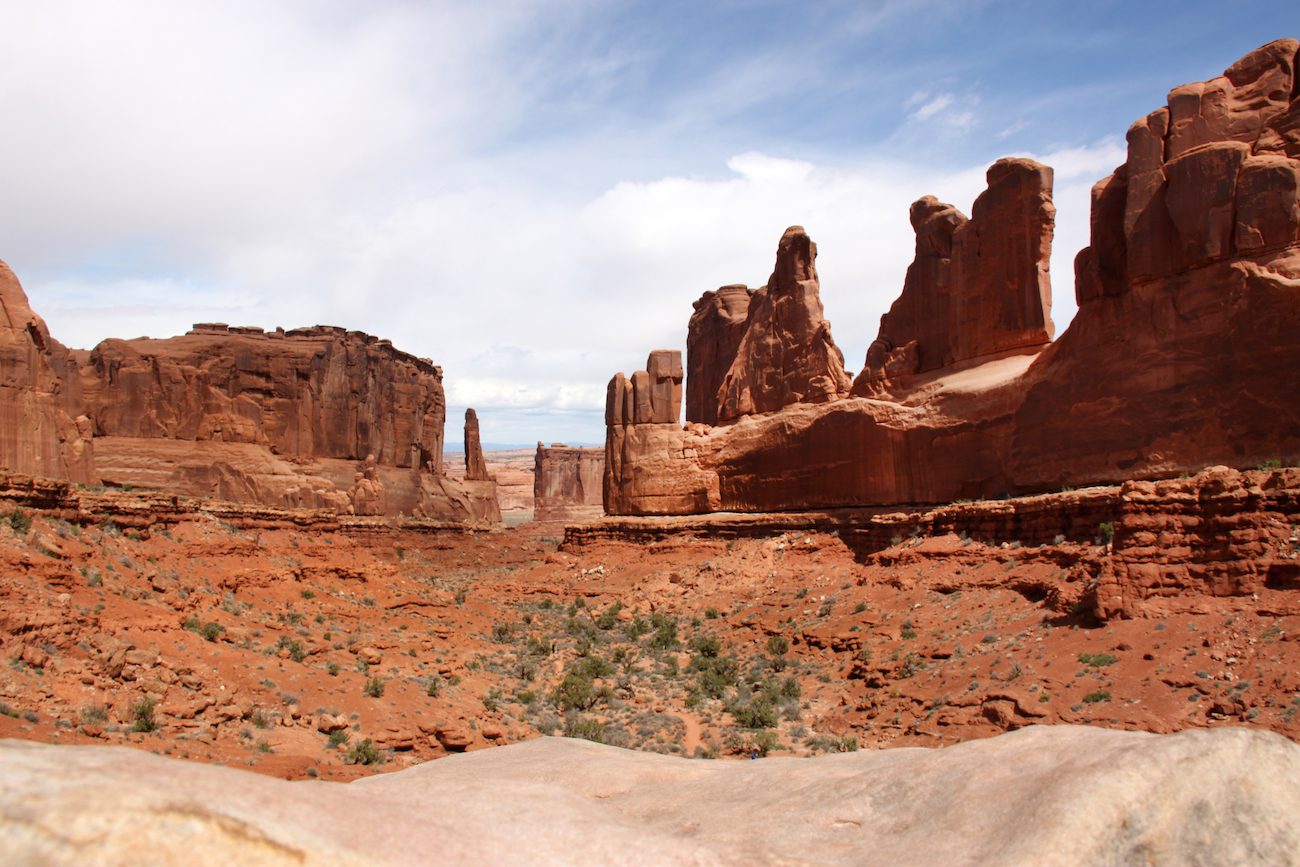 On one hand, the formations are stunning and it’s great that so many people come to appreciate them, but on the other hand, you’re in the heart of nowhere with hundreds of other tourists crammed onto a little highway snailing your way through a maze of rock piles. It’s a weird thing to think about. And in true American fashion, you can potentially see almost all of the main features without ever getting out of your vehicle.

Luckily for us, there were far more cars on the road than people on the trails. Still, the drive was fun and the windy pavement wasn’t nearly as congested as I’m told it can be in summer. 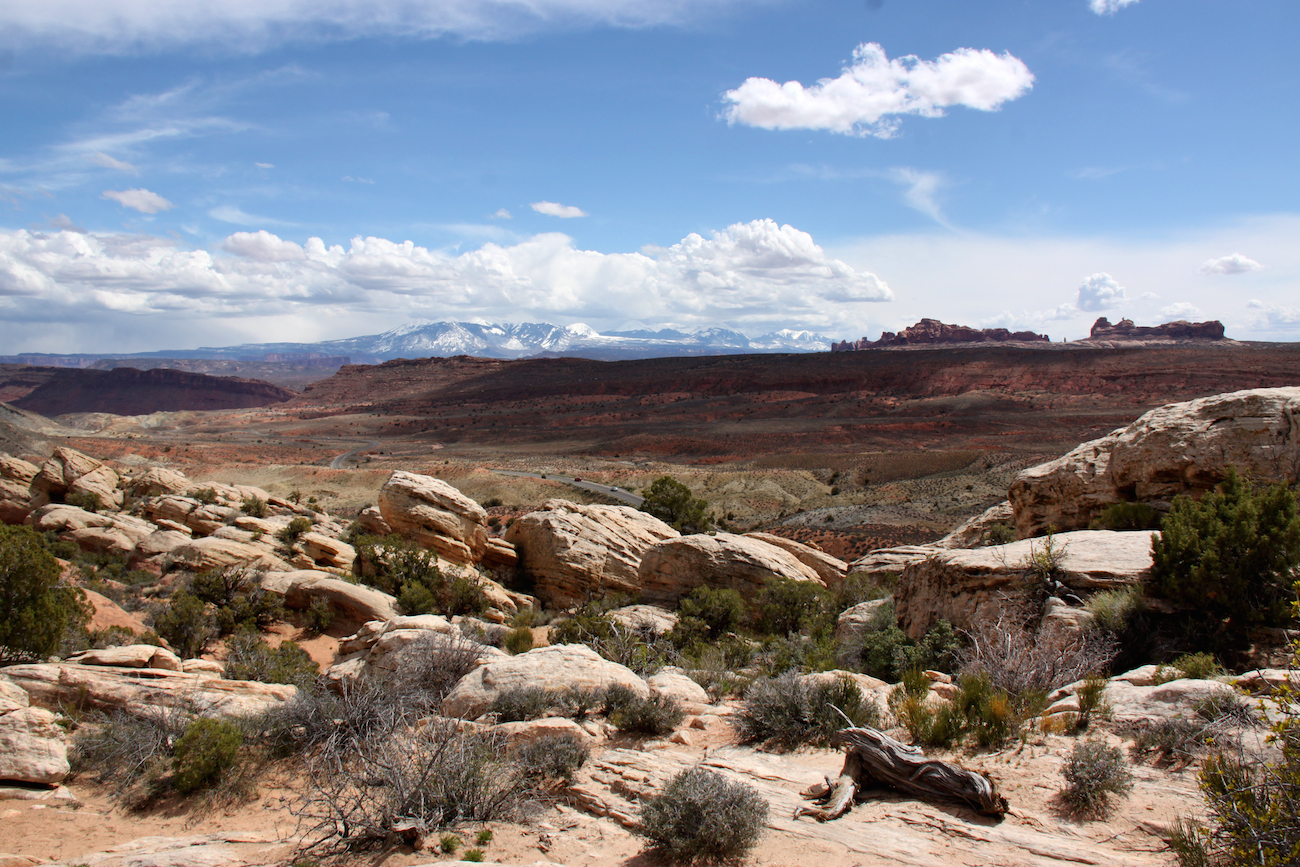 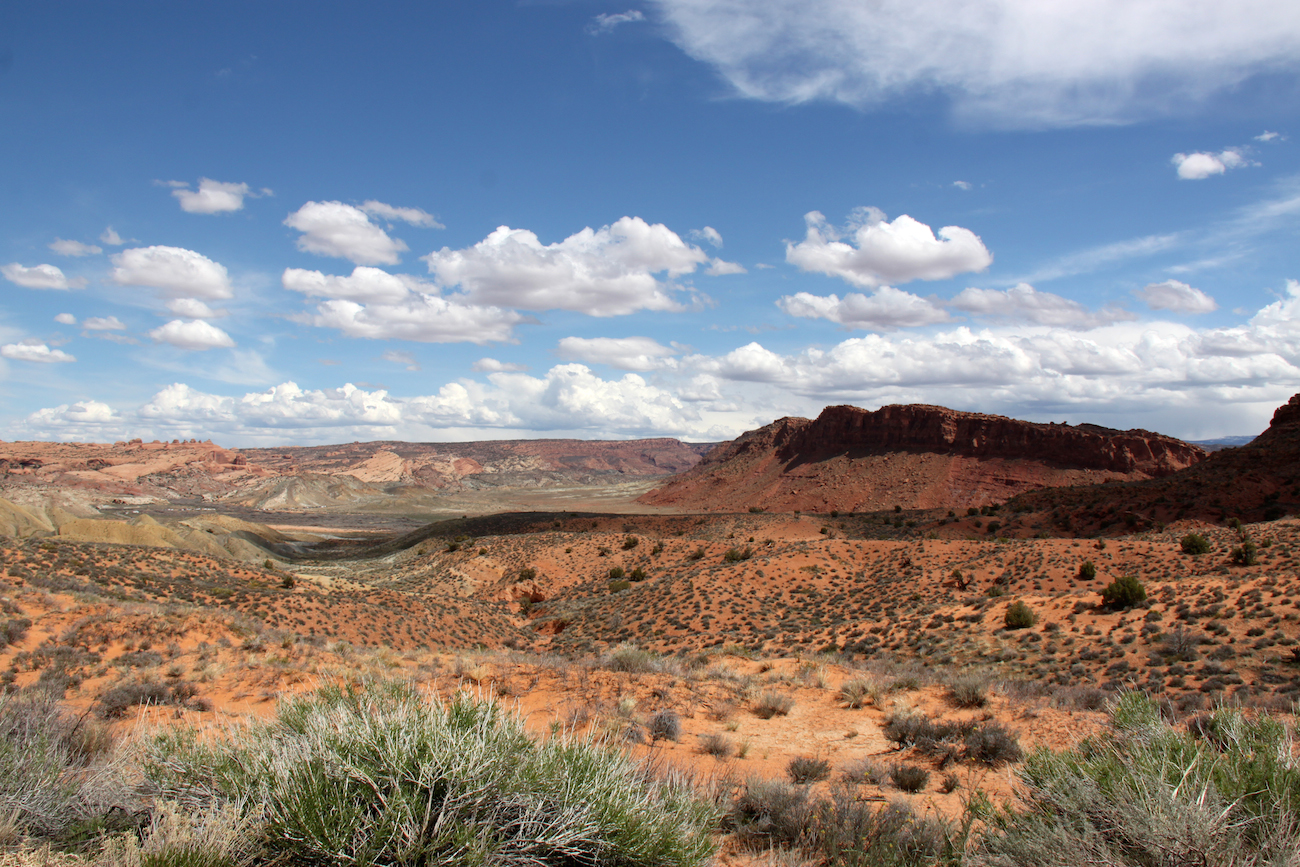 Just so you know, Arches is full of lizards, and some of them aren’t that hard to catch. Alex told me I would never catch one (which he’s said many times before), and then about 10 minutes later I had this little guy in my possession (which is a feat I have accomplished many times before). Let me tell you though, right after I caught this cutie, I saw two more about four times the size of this precious angel, and sadly they both escaped me. 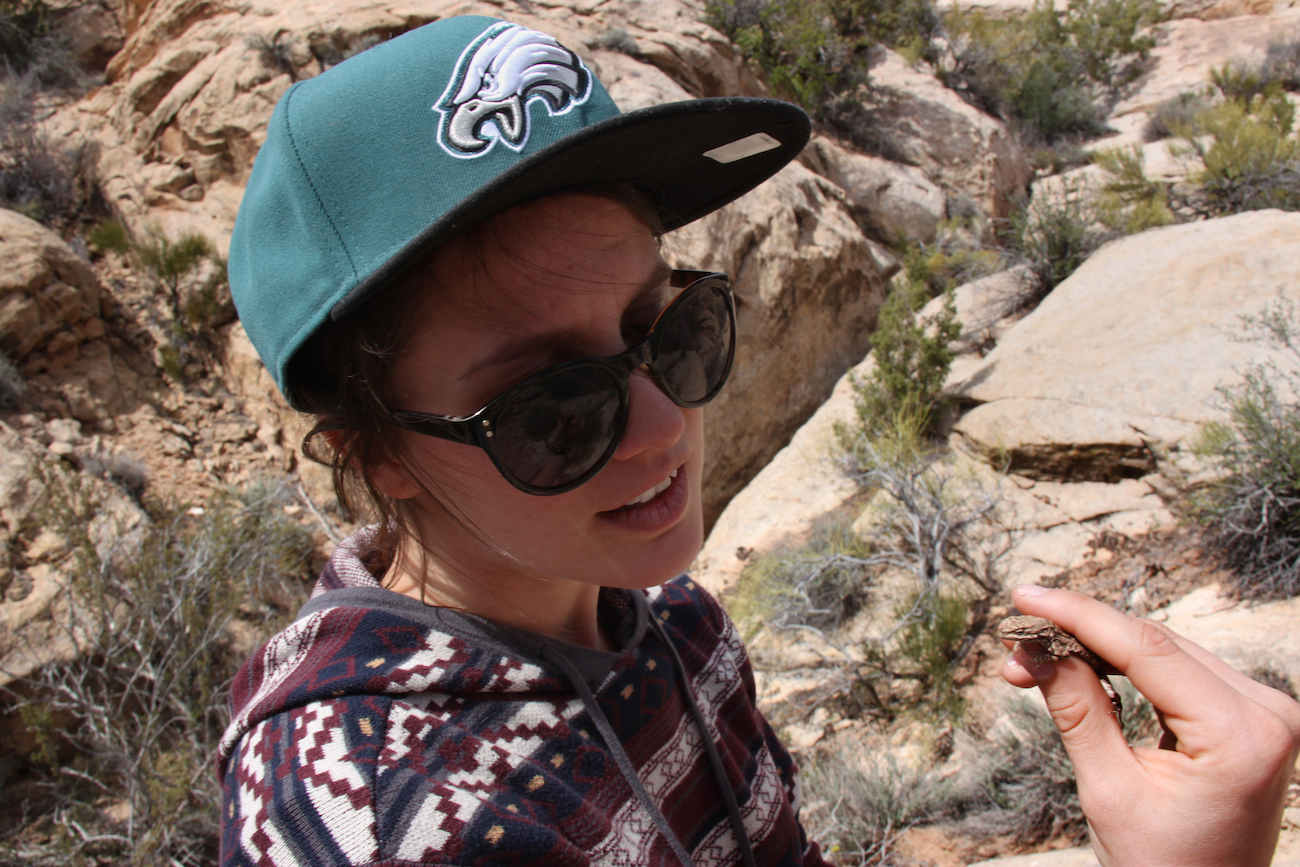 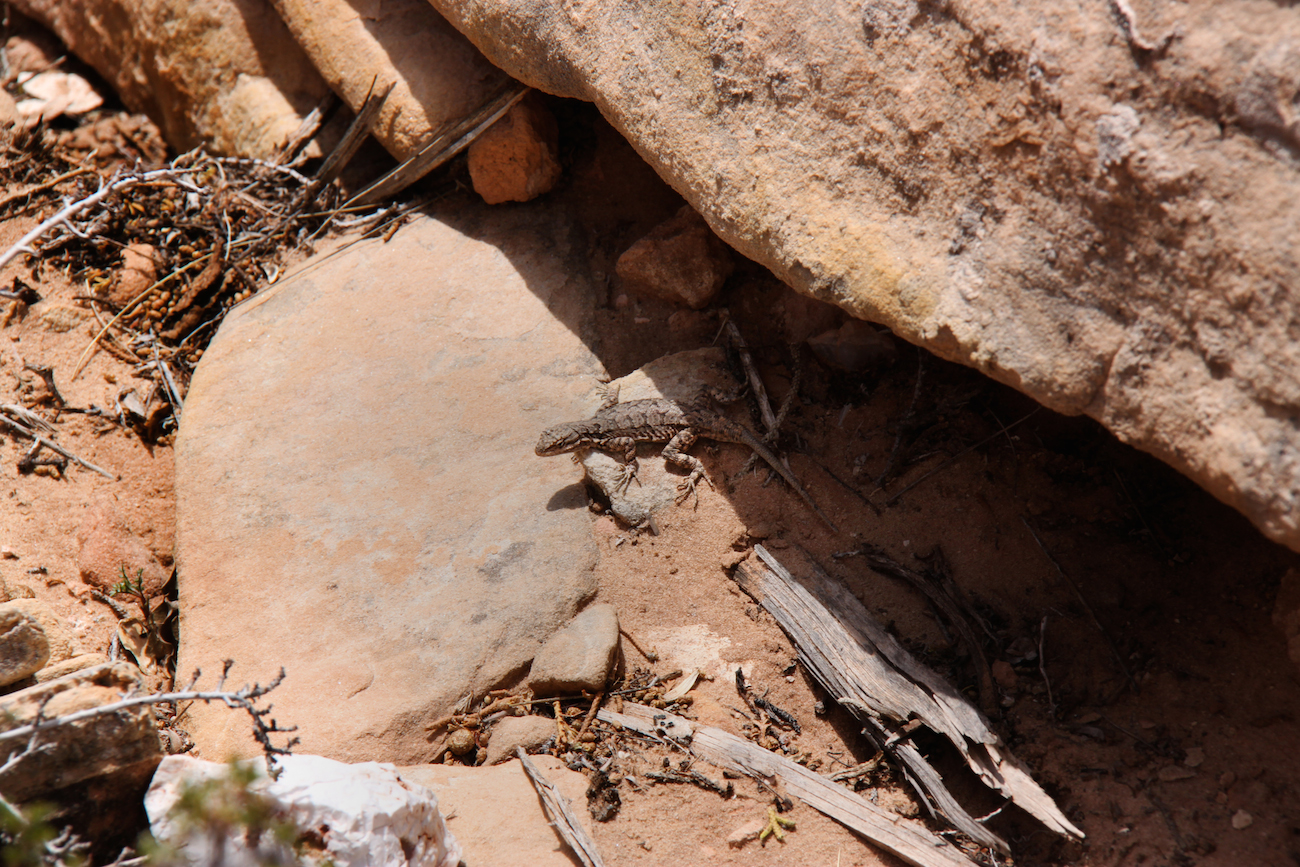 The only feature I really wanted to see is the cheesy one Utah puts on all of its postcards: The Delicate Arch. We saved this little gem for sunset to see it with the best light. On paper they make the Delicate Arch trek sound way more difficult than it actually is, but it was still a pretty crowded walk. Dealing with the heavy foot traffic was worth seeing the Delicate Arch in person though. Being able to climb in, on and around it was unforgettably fun. If you look to the left in the picture below, you’ll see Alex in his white shirt overlooking the people below. This is where we watched the sunset and where the panorama above was taken. We were the only ones up there. And then, on the way down, Alex dropped my water bottle. 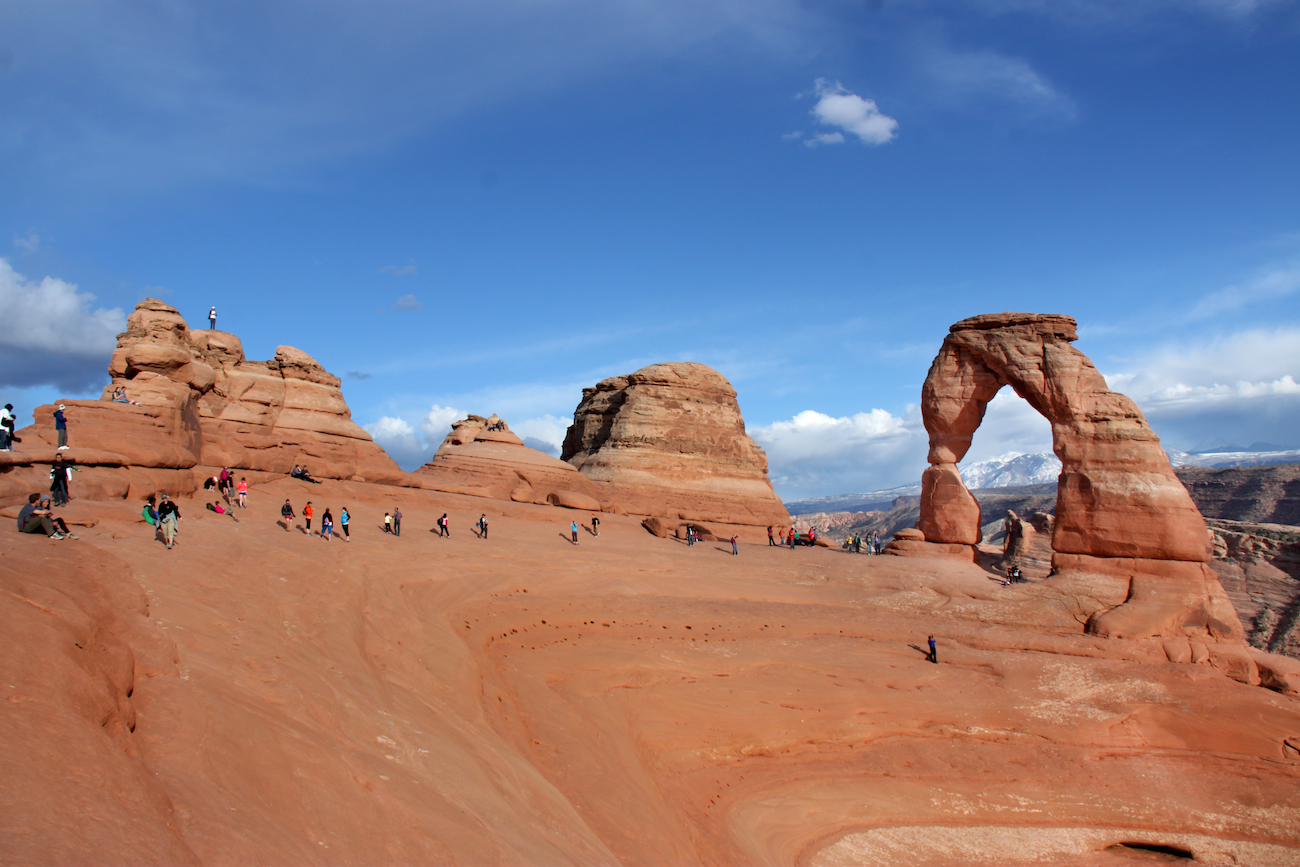 The entire Arch went silent and everyone watched as my plastic bottle tumbled ever so daintily down into the bowl of the arch with the same sound a plinko chip makes as it’s falling through the pegs on the Price is Right. After the jeers subsided, Alex climbed into the bowl and retrieved it.

By the time we got back to our car, the sun was gone and the sky was quickly losing color. After we’d cooked ourselves an instant-noodle & veggie dinner, the sky was black and so was everything around us. At the suggestion of a friend, we had a rough idea of where we wanted to camp, but as we drove down the chosen road, we were greeted by a rather intimidating sign: High Clearance Four-Wheel Drive Vehicles Only or You Will Die. Coupled with my irrational fear of Mountain Lions, we decided to camp somewhere else.

And so, we ended up in a parking area under one of my favorite features for the night. Just as we were on the edge of sleep, a truck pulled in next to us. GO DIRECTLY TO JAIL. DO NOT PASS GO. YOU MUST PAY $200 DOLLARS. Turned out it was just a guy with a camera trying to snap some long exposure shots. He didn’t stick around long though because Alex accidentally set off the car alarm (this is not the first time), blasting miles of echoey chaos through the park. For the rest of the night, we slept uninterrupted under the supervision of the Three Gossips and the Courthouse Towers.

In the morning, Alex claimed he was “Arched Out”, and we almost skipped the Devil’s Garden to get straight on the road, but I was adamant about spending one more day in the rocky wonderland. Turns out the Devil’s Garden was the highlight of our trip to the park.

We opted to take the “primitive trail” which luckily proved to be too difficult for 95% of the Arches visitors. The ‘highly difficult primitive trail’ was actually not that difficult. I guess it’s all relative, so for us, compared to hiking up mountains in New Zealand, the primitive trail was a playground. The entire hike took about 5 hours, winding through some of the coolest formations I’ve ever seen. 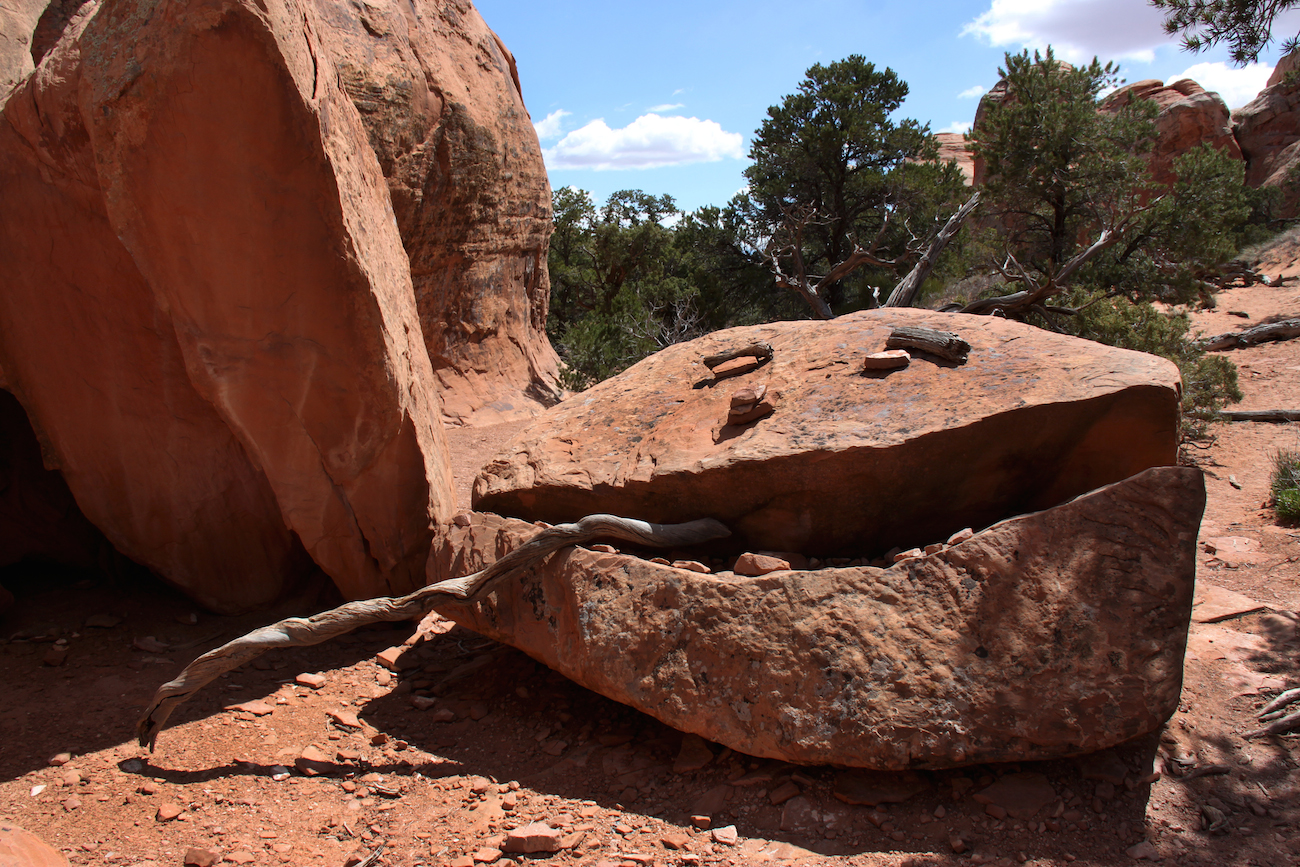 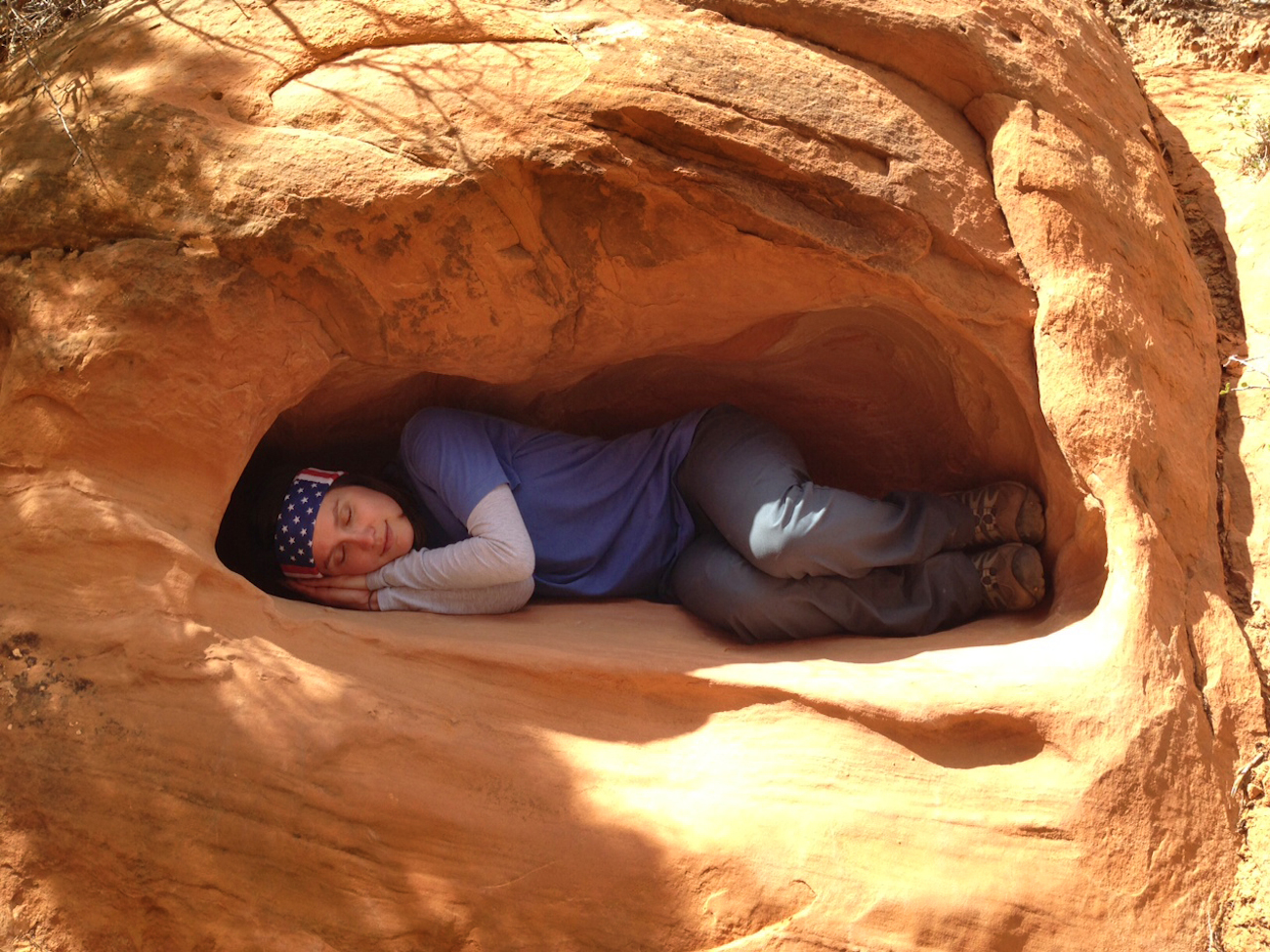 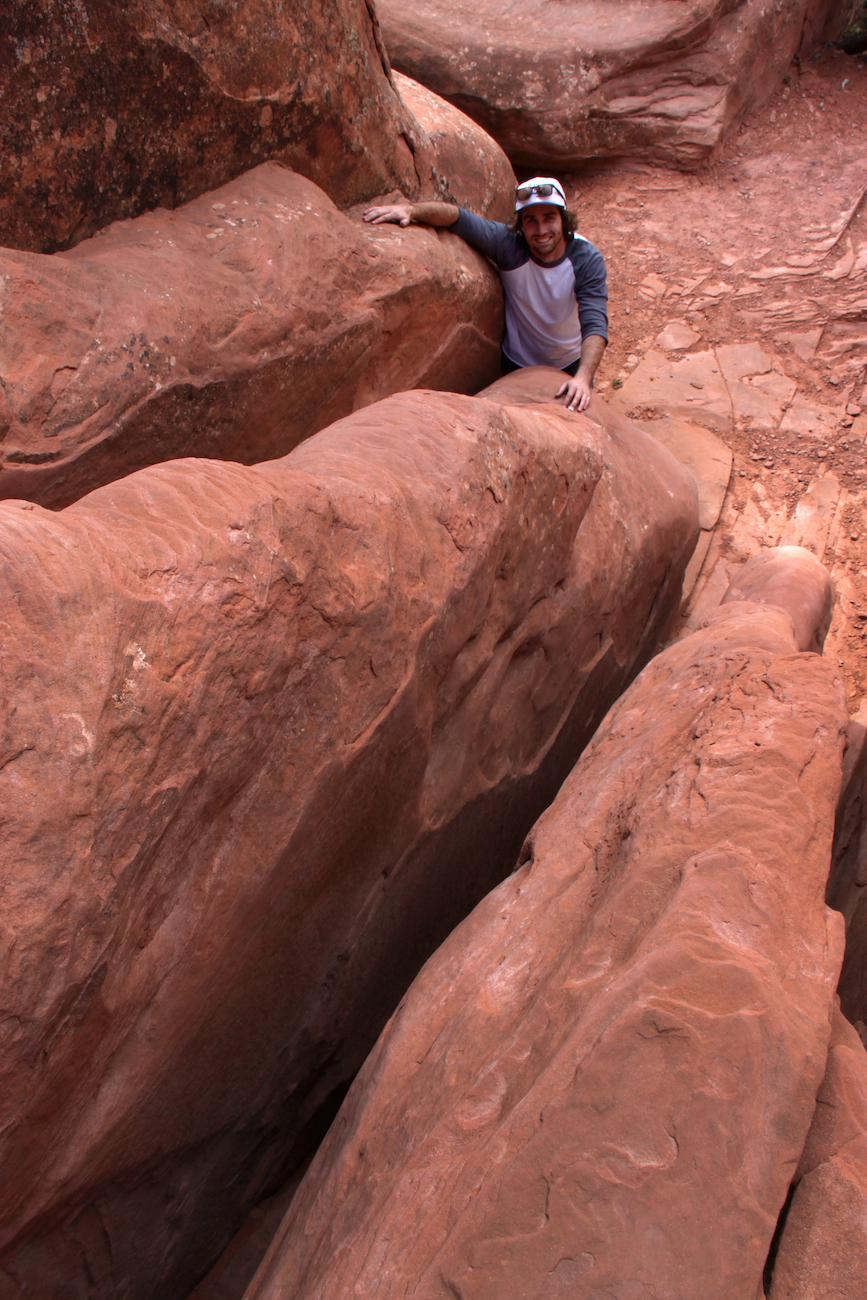 The dirt trail meandered through archways and zig-zagged around the big rock fins, but the best part was actually hiking up and down the fins. We thought it would be recklessly exciting to veer off the trail and take in the scenery from the back of a large fin. With a bird’s eye view, we could easily see the trail below, and decided it would be recklessly exciting to maneuver down the face of the deceptively steep fin beneath our feet instead of re-joining the trail where we left it. 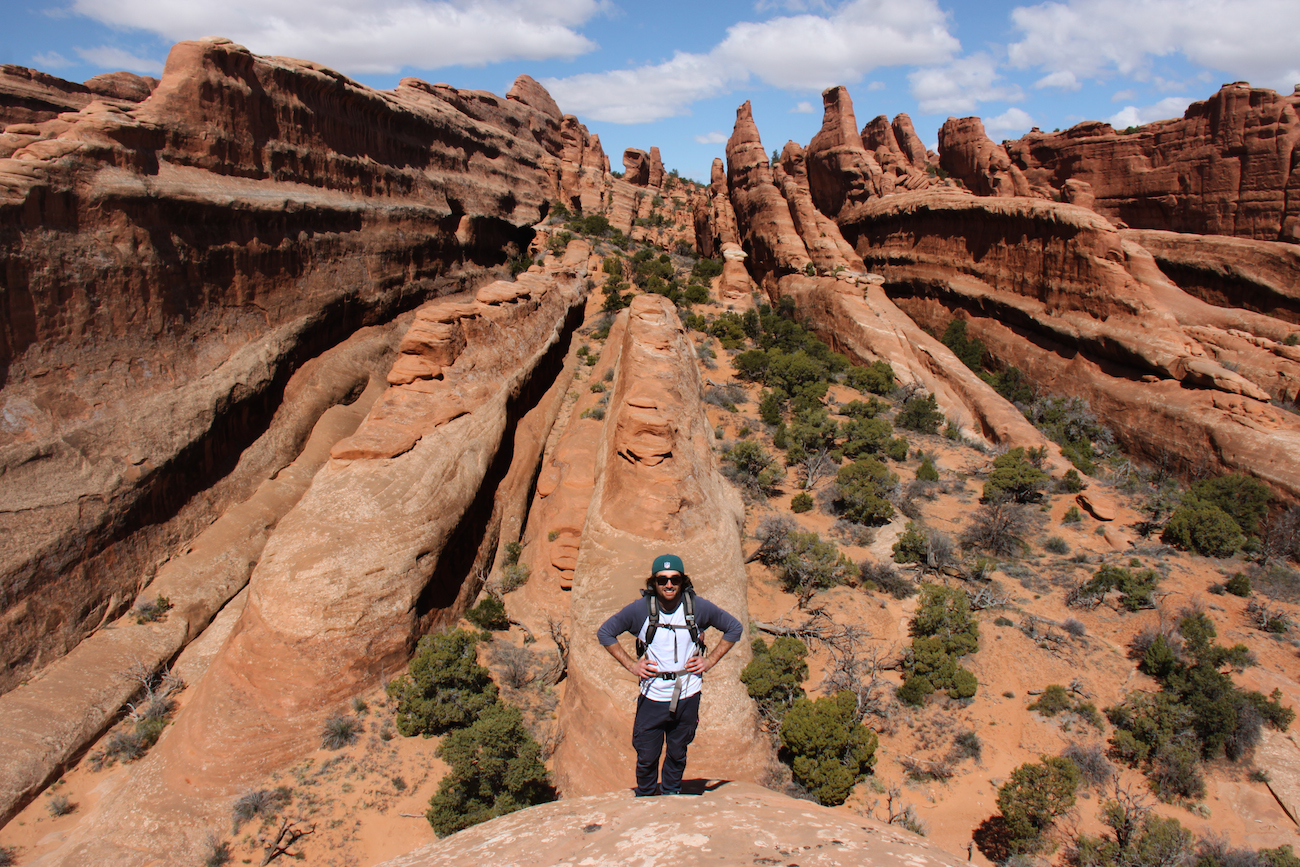 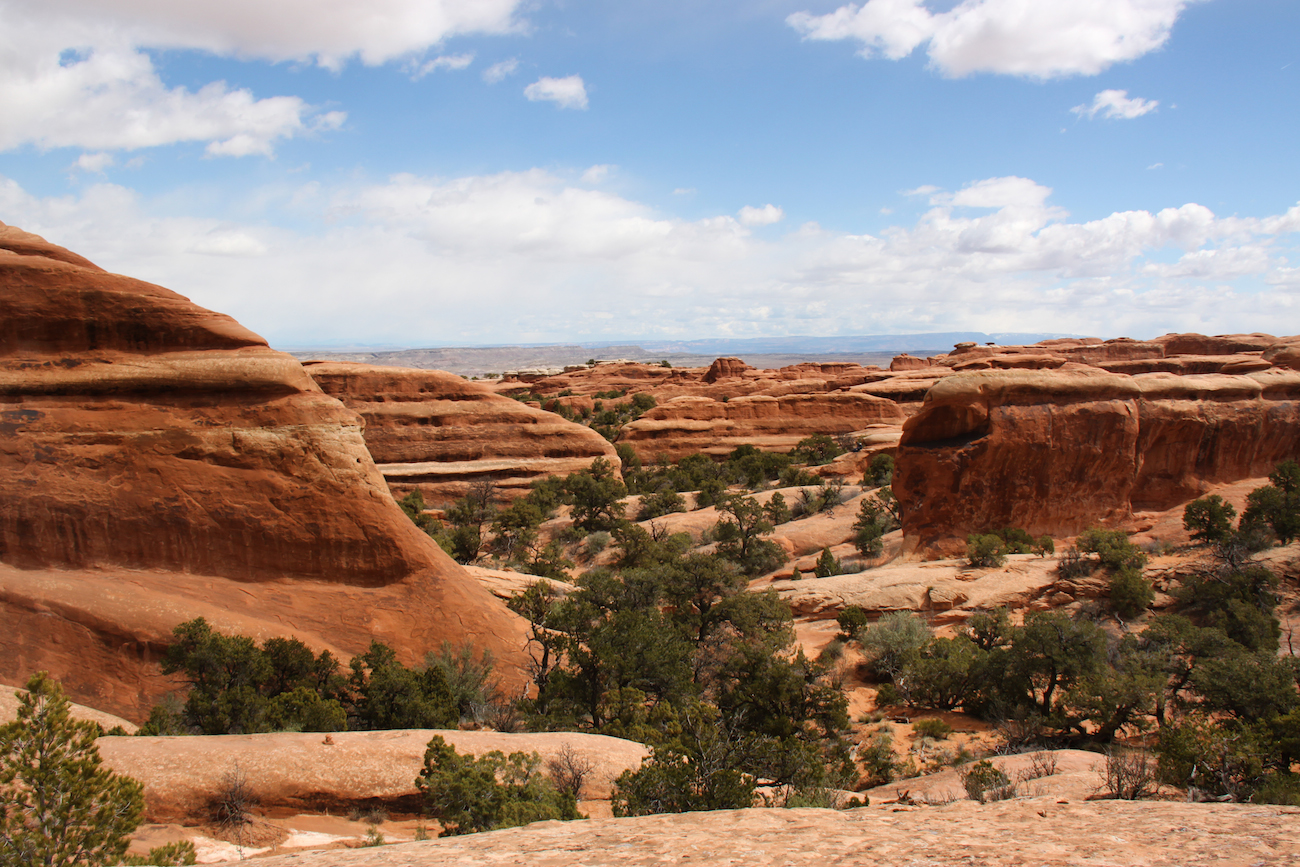 Our first attempt scared me to the point that we had to turn around and head back to the path. The problem is that the fins are so smooth and rounded, there are no footings or grips to grab hold of. Once you start sliding, there’s nothing to keep you from plummeting painfully to the bottom. After dragging my feet for a few disappointing steps back to the trail with slumped shoulders, I decided to give our path-less-traveled another chance. My heart was pounding out of my chest and my legs were shaking, but with Alex’s help, we made it down safely. Alex later admitted that we were probably in over our heads, and given the chance, he wouldn’t risk it again. The next line out of his mouth was, “It was pretty awesome though … Yeah, nevermind. I’d do it again.” 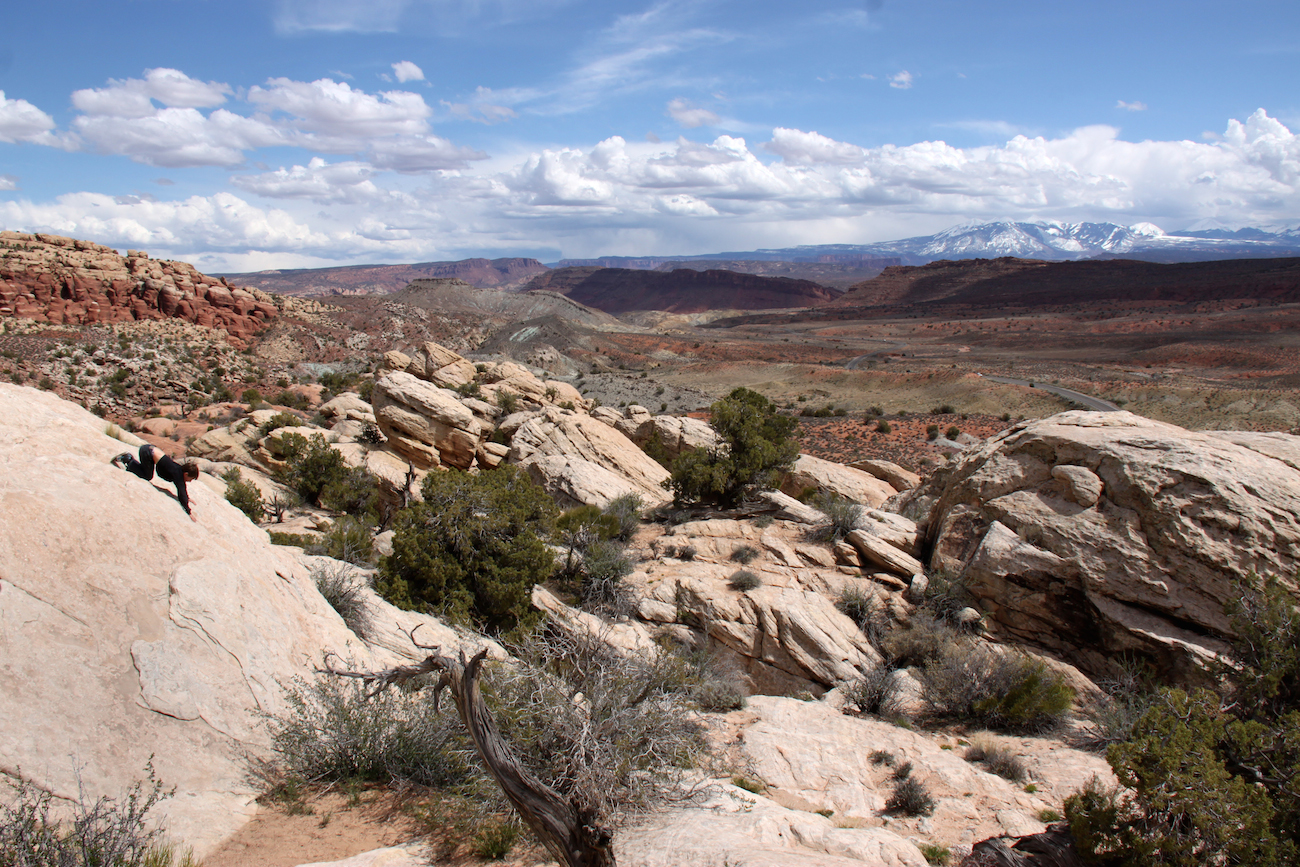 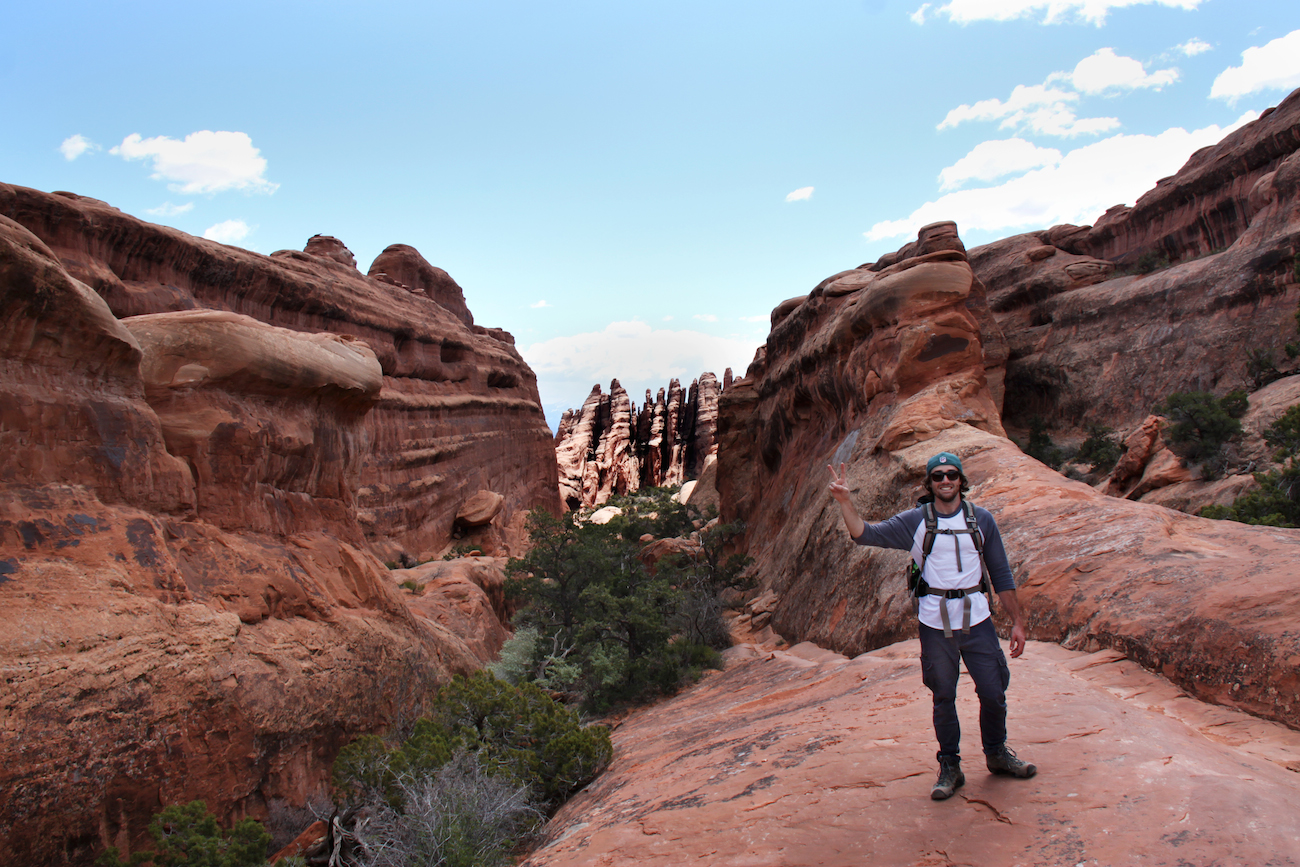 And that was where our Arches experience ended. We finished the Devil’s Garden hike took a dirt road to the highway. Of course, first we stopped for lunch with a beautiful view of my favorite playground in the whole wide world.