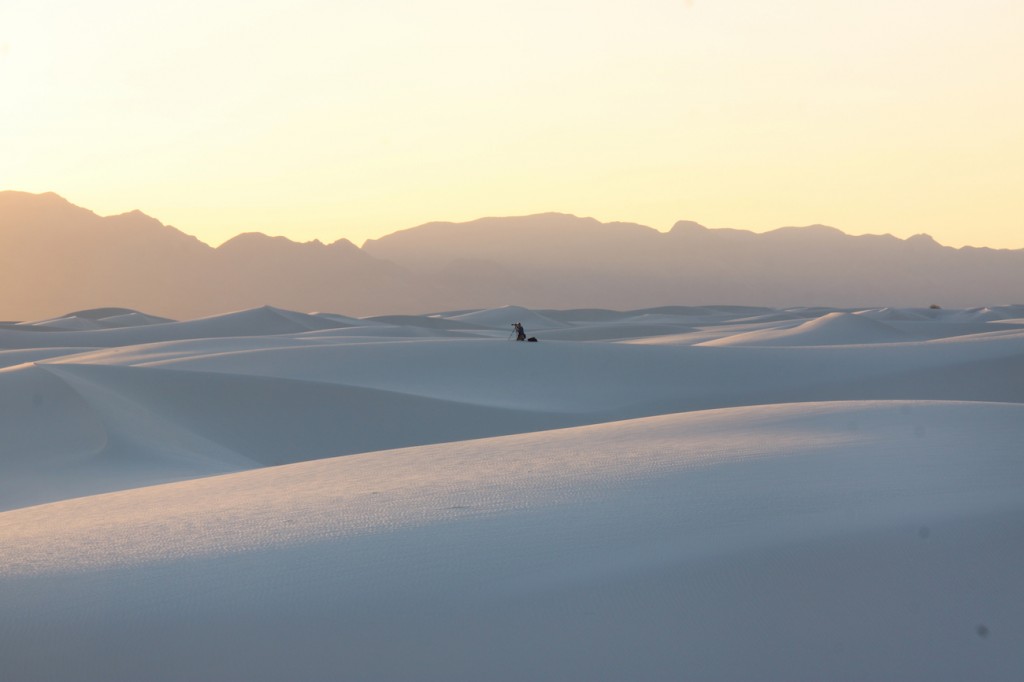 We drove 563 miles from Yuma, Arizona to Alamogordo, New Mexico chasing the lunar eclipse after a chance encounter with a photographer we met at the Grand Canyon. After sleeping in a Wal-mart parking lot, driving for 8 hours and frantically hunting for a tripod, we arrived at the White Sands National Monument visitor center exactly 10 minutes before closing time. With fate watching over us, we were granted the very last back-country permit available for the day. I thought I was destined to photograph the lunar eclipse. As the sun began to set over the dunes and the moon began to rise over the cliffs, I readied myself for a long night of shooting. And then my brand new tripod, only an hour in my possession, came out of the box in pieces. Broken. Just like my heart. 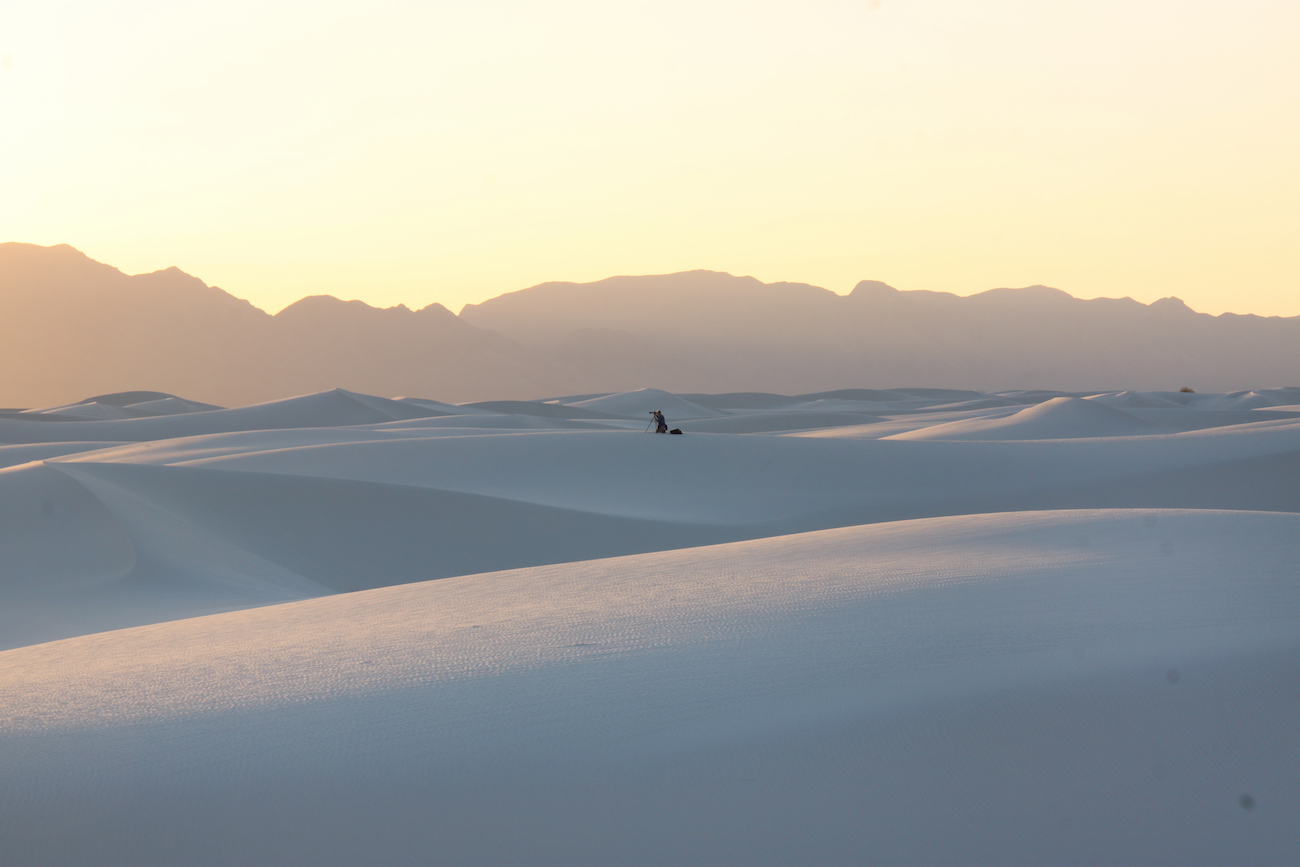 When those plastic pieces rolled out of the box and landed in the sand, I stopped breathing. I looked at Alex and watched the smile leave his face in slow motion. And then, my head began to spin, but as it spun, I kept my eyes open and had a good look around. We were standing in the heart of a white ocean, a rolling sea of wind-swept waves like nothing I had never seen before. Hidden amongst the dunes was our campsite for the night. I took a breath as Alex finished singing a chorus of profanities, and then we had to laugh. With a setting sun, a rising full-moon, a lunar eclipse and a night in the desert to look forward to, a broken tripod was a minor glitch. 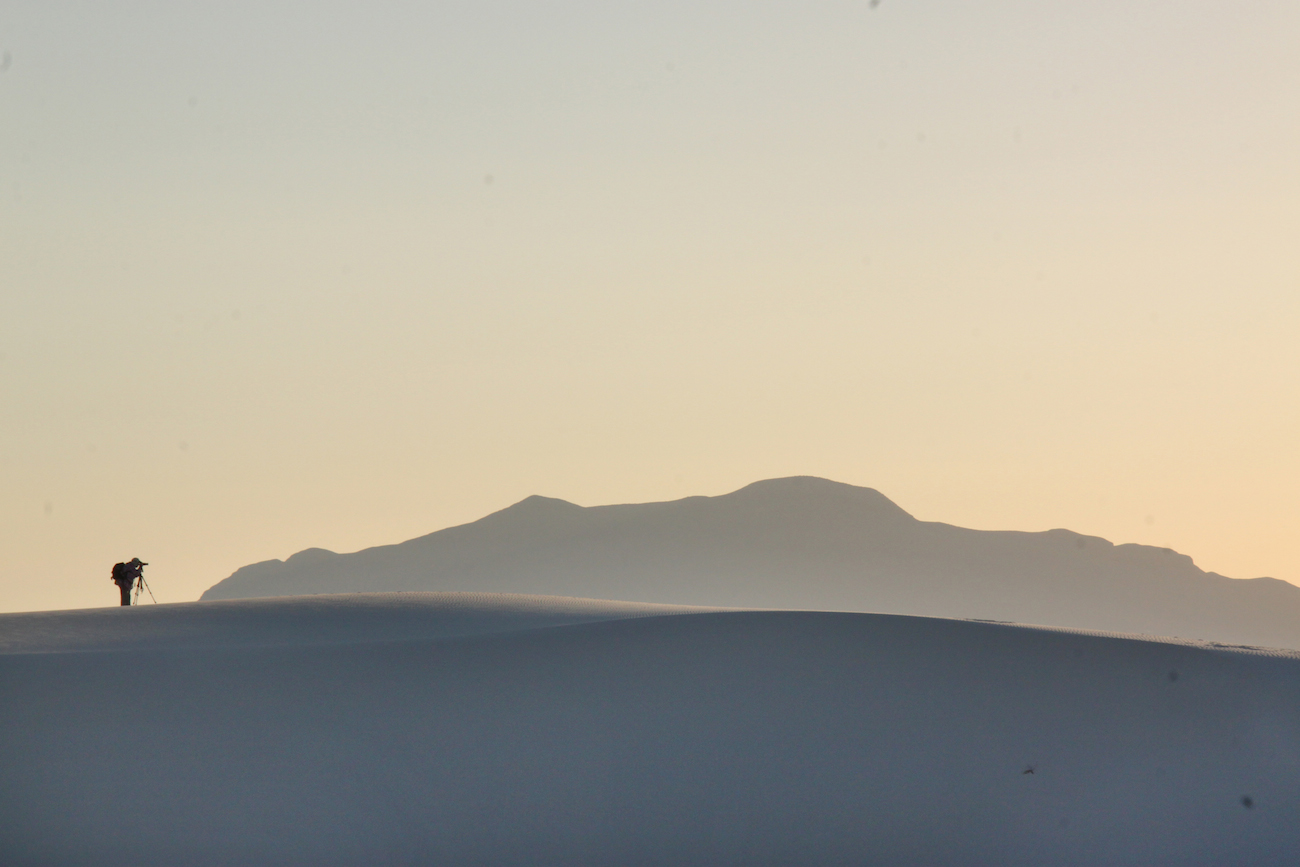 I’ll admit that I still felt pangs of sadness every time a photographer in my line of sight bent over his tripod, and I was maddeningly jealous of the shots I was missing out on, but it was still an unforgettably awesome night. Beer in hand (you know how I feel about rules), we perched ourselves on a dune and watched the sun sink behind the mountains as the moon rose over the cliffs. 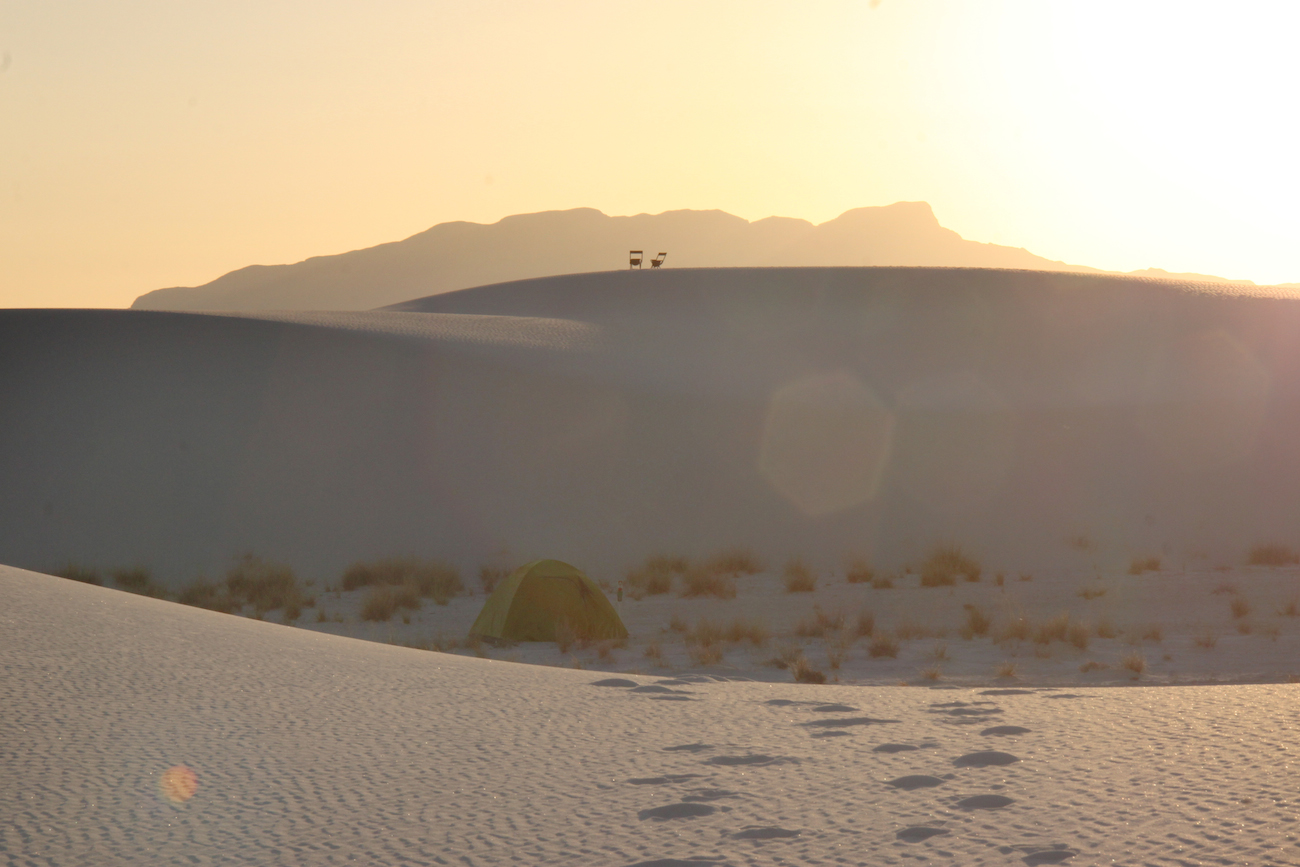 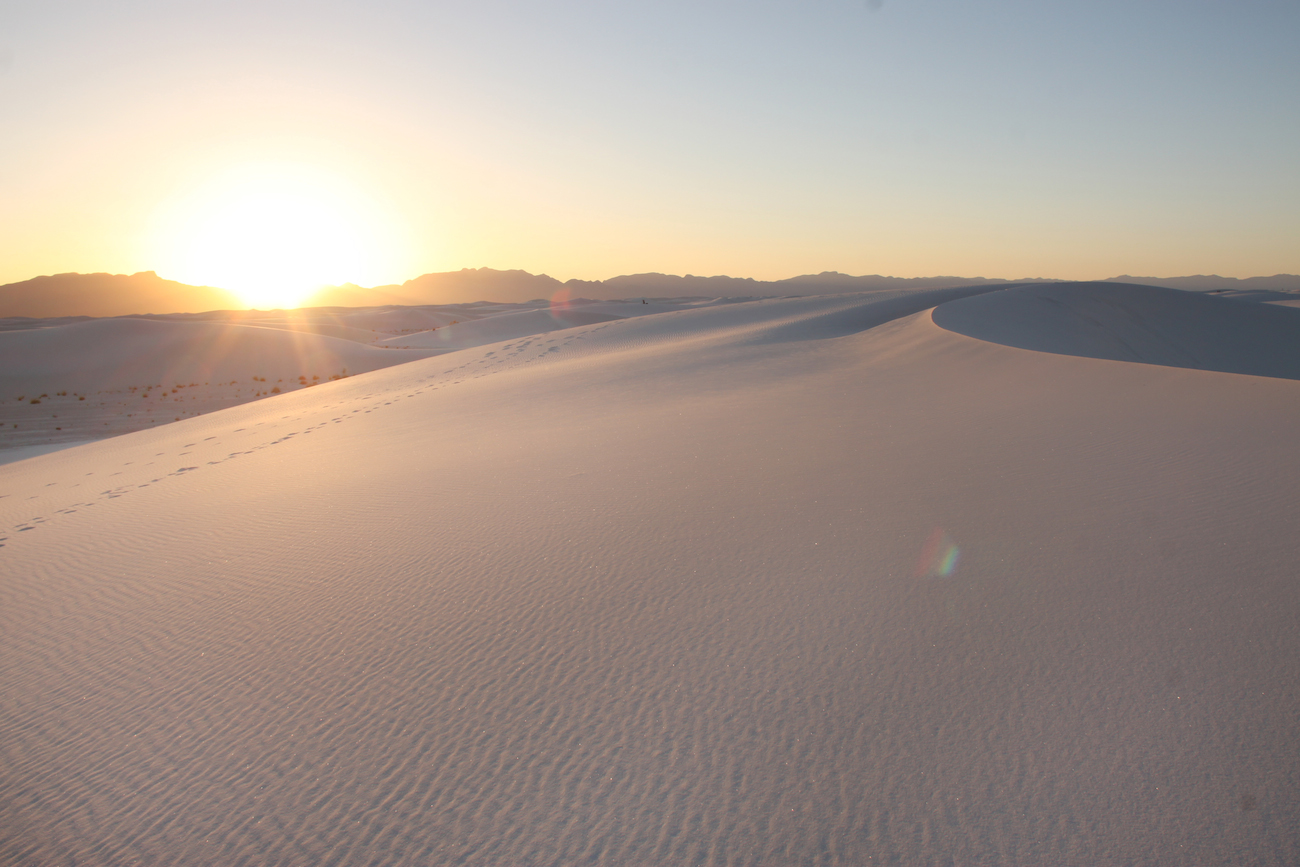 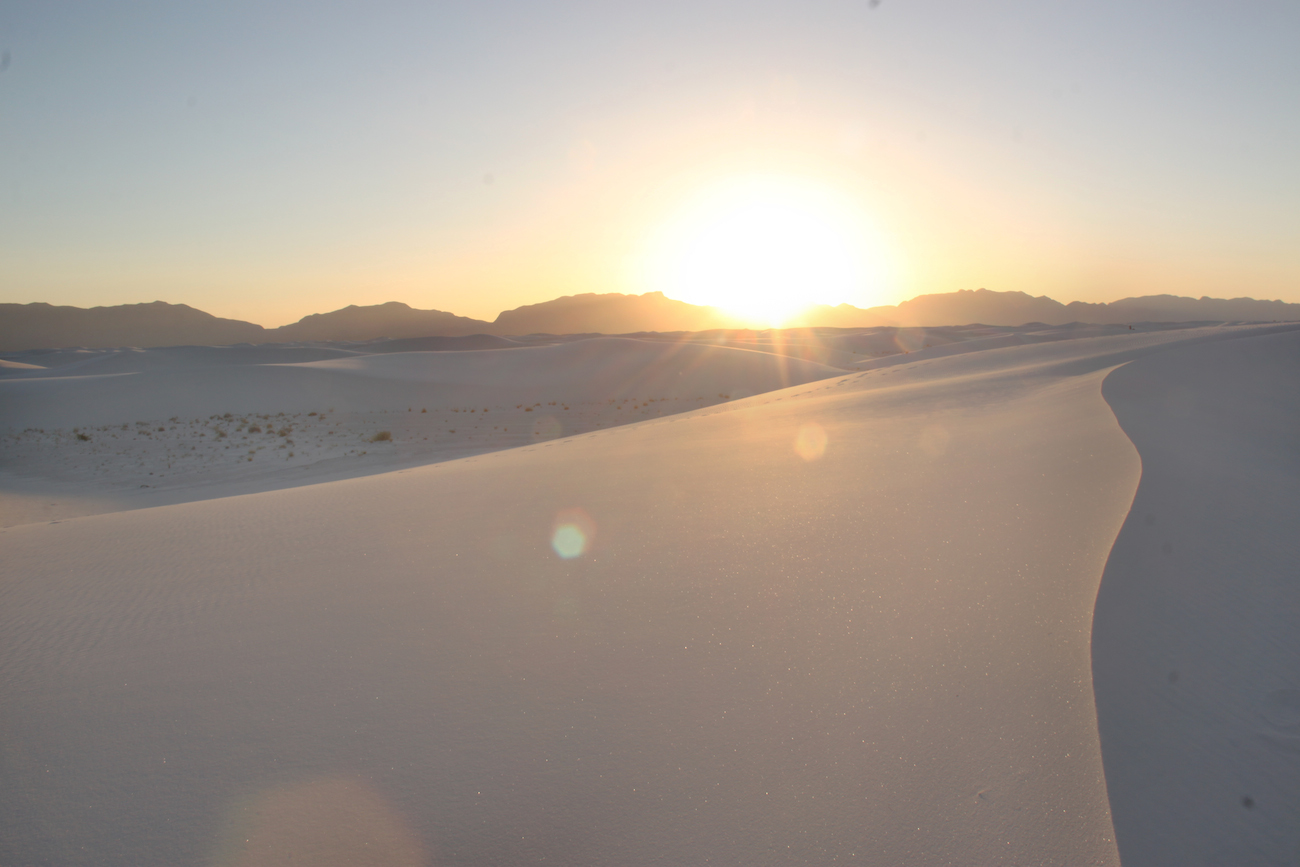 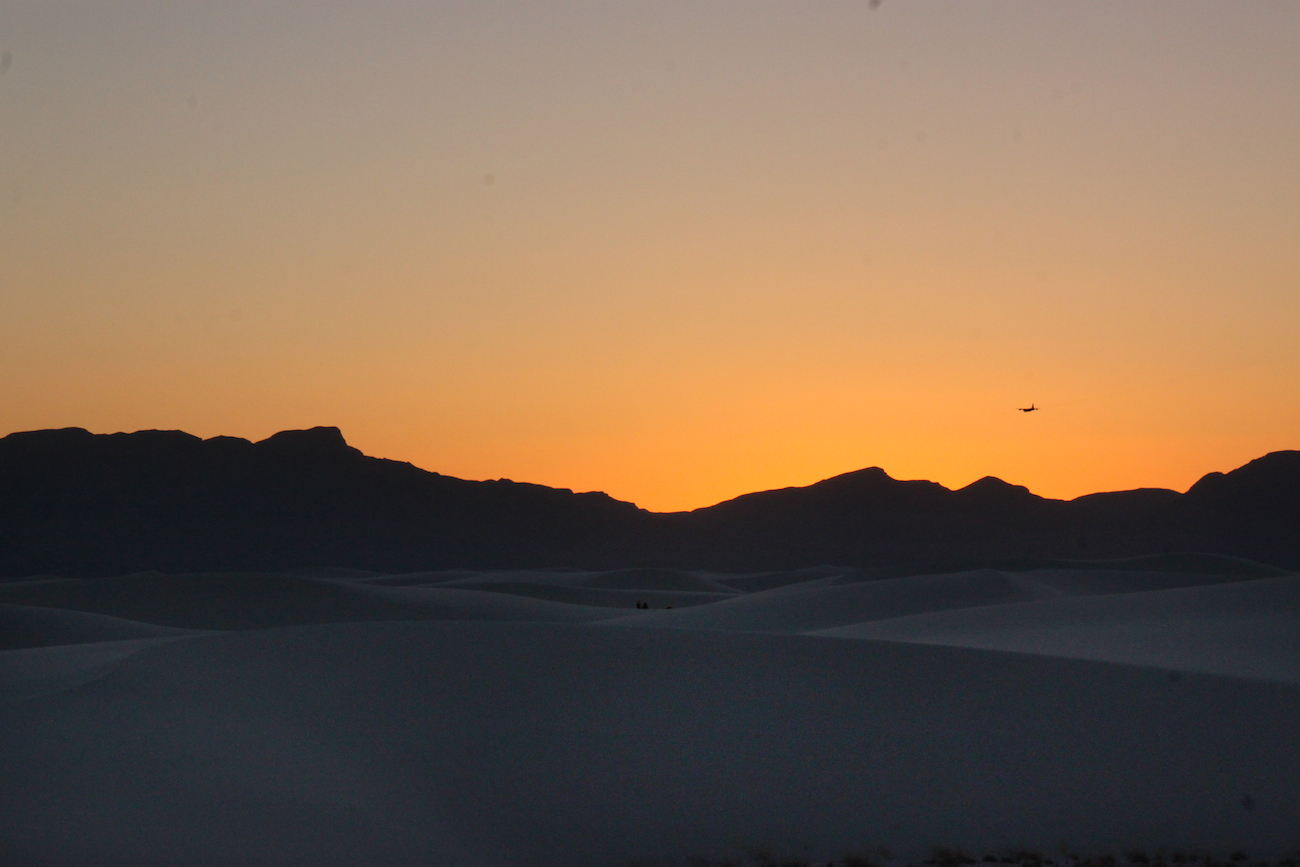 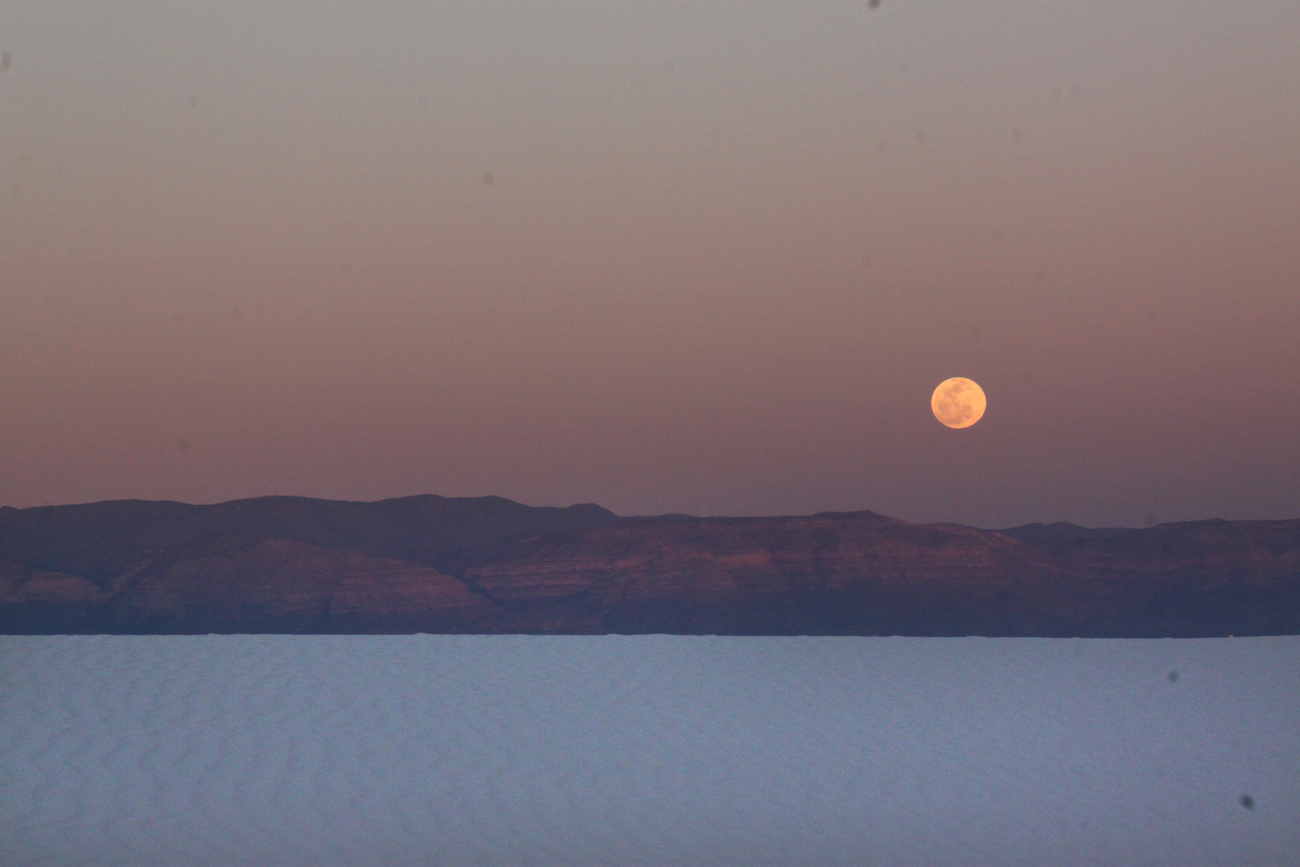 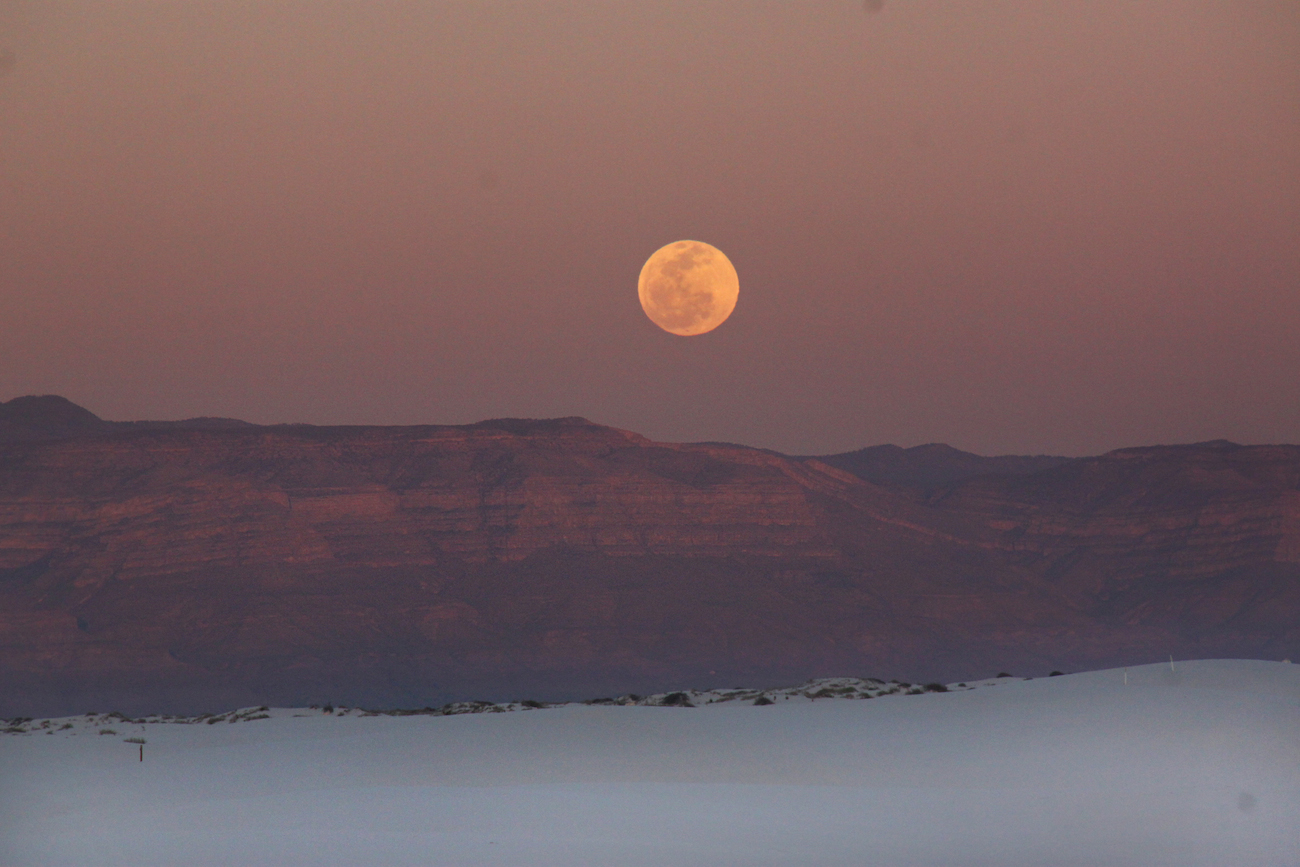 When all of the color had finally been drained from the day, we waited for darkness … and it didn’t come! As the moon reached higher and higher into the sky, the dunes grew brighter and brighter. It was like someone was adjusting the dimmer on a ceiling light. The moon beamed down and painted our shadows on the sand the same way the sun would on a sunny, summer day.

We fell asleep in our swag before the start of the eclipse. A few hours later when we woke up, the earth was just starting to cast its shadow over the moon. Bundled in our sleeping bags, we watched the moon’s bloody transformation. And then, at the height of the eclipse, the desert went dark and the stars came to life. The dunes were nothing more than black shadows and an abyss of starry darkness. In the distance though, we could see a fog of light from the cities leaking into the night, but it was weak, and the diamond canopy above us remained intact. Slowly, earth’s shadow began to pass, and once again, light came pouring down from the moon, illuminating the desert once again.

I did do my best to use the swag as a makeshift tripod for some long-exposure shots, and Alex gave it his best effort too, but mostly our night in the desert is just an awesome memory. 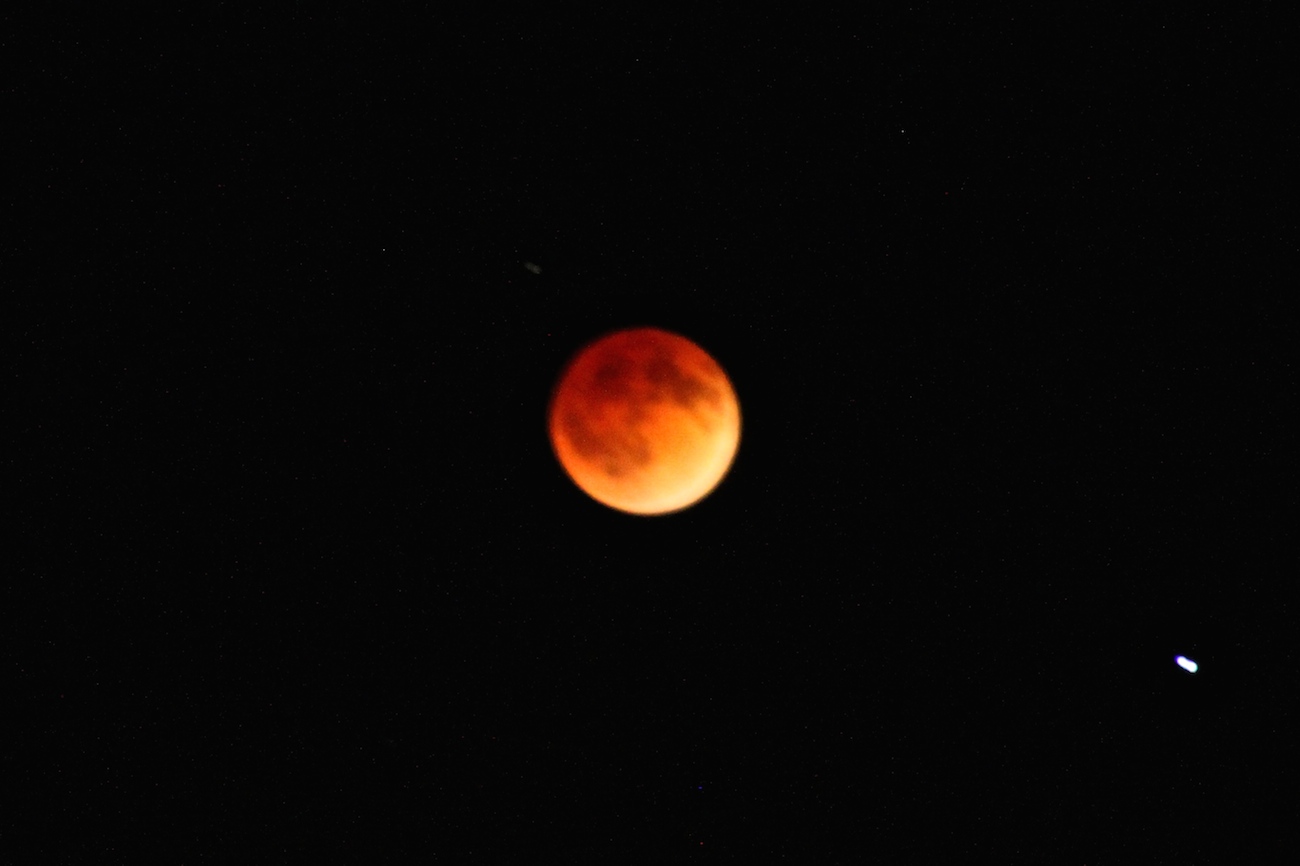 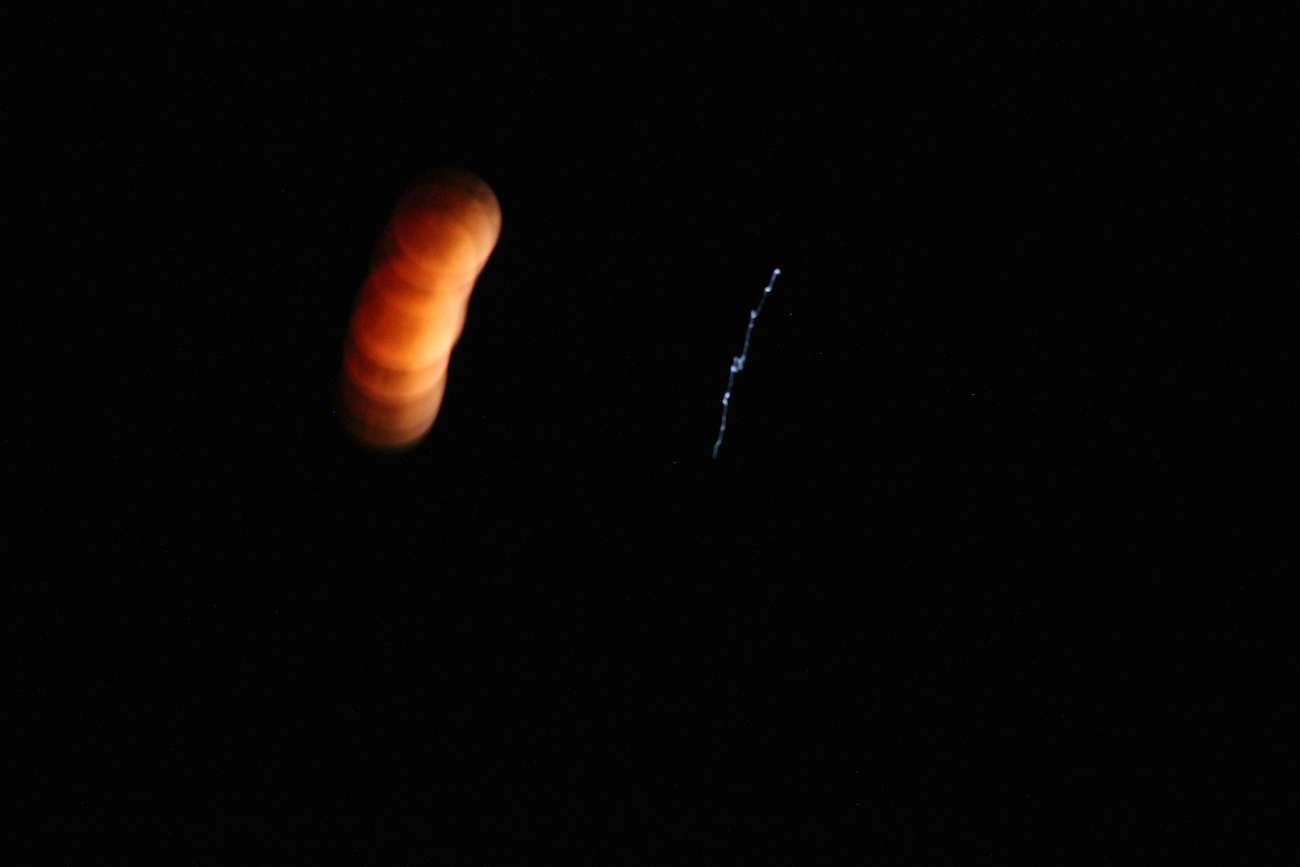 This night still plays like a movie in my head. In fact, I loved the dunes so much, I even bought a magnet from the gift shop. That says a lot. I have to tell you though, during the day, the dunes are a very different reality. Kids and pets and families sliding down the blindingly white mounds on fluorescent plastic sleds. Pretty gross under the sun. But the moon … ahh the moon! 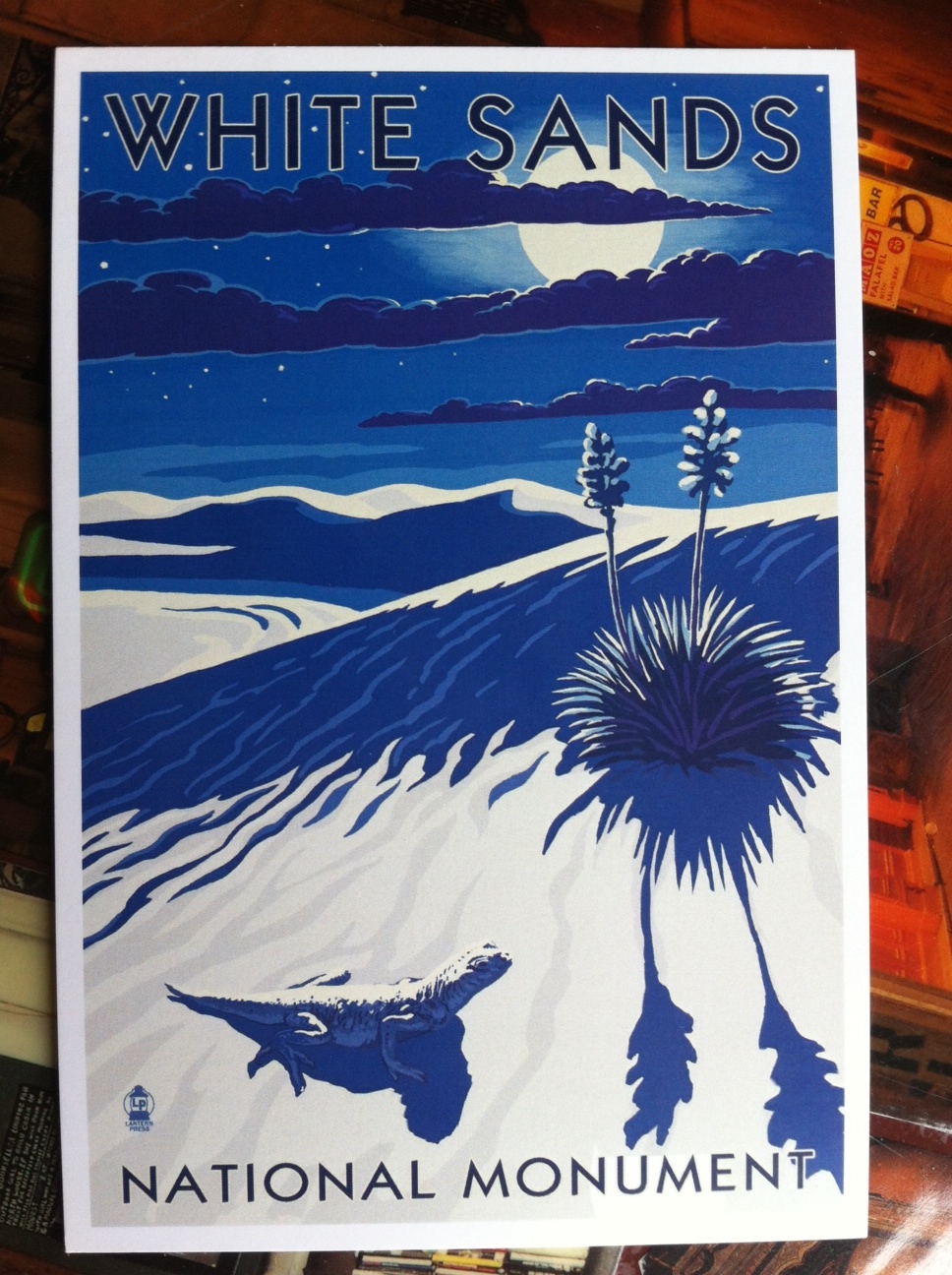