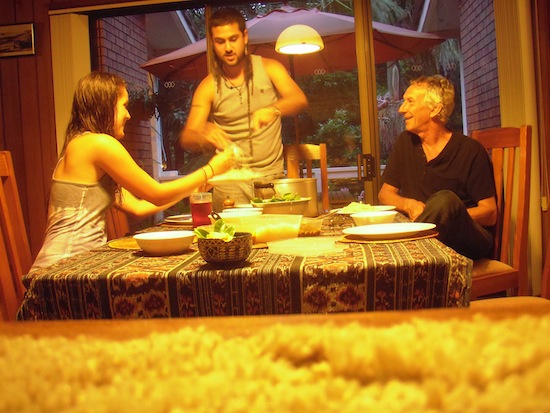 As seen in the tbt* Sometimes when I tell people I couchsurf, they think it’s a sport. When I tell them what Couchsurfing actually is, they think I’m a lunatic for doing it. In fact, according to the Couchsurfing website, there are more than 7 million other lunatics in more than 100,000 cities in every country in the world participating in the project, and that number is still growing.

This photo was taken in Whangarei on top of a peak only accessible to those who know the way. Alex & I were lucky enough to be Couchsurfing with a local who was in on the secret. After leaving the final destination of the tourist path, we trekked through some brush and rock-climbed our way to this stunning view!

The first time I couchsurfed was in Cairns, Australia in October 2011. I was traveling with my best friend, KC, from back home. In 2010 KC heard about Couchsurfing from some friends and signed herself up for a weekend surfing in Portland, Oregon. All she had to do was create a profile online and then she could use the website’s search engine to find ‘hosts’ who would welcome travelers, or ‘surfers’, into their homes as a means of accommodation. KC’s first experience in America was a good one so we were eager to try it in Australia.

I remember arriving at the Cairns Airport to a nearly empty passenger pick-up terminal. Leaning casually against the passenger door of a white pick-up truck was a 6-foot-something stranger of a man with a bald head and hands that could easily palm my skull like a basketball. This was our Couchsurfing ‘host’. KC and I were about to voluntarily load all of our possessions into his vehicle and take a ride over to his house for a slumber party.

To say that KC and I slept with one eye open on that first night would be an understatement. Despite having a room to ourselves complete with two single beds and freshly laundered sheets, we didn’t sleep a wink. The locks on both our bedroom door and the attached patio door were broken. Was it deliberate? Were those broken locks meant to allow predators a stealthy entry? With my Swiss Army knife tucked under my pillow, I turned out the lights, ready for anything. For hours KC and I lay in the dark, blinking and sweating, every bump in the night making our hearts beat twice as hard … and then it was morning. We spent the next three days boating, wake-surfing, jet-skiiing and taking scenic drives through the city and surrounding areas.

Since then, I have couchsurfed with more than 20 different hosts throughout Australia and New Zealand, some of them while flying solo. I’ve even met up with a few couchsurfers in America. To date, I have never had a negative experience. That doesn’t mean that people don’t have them, but the amount of risky business involved with Couchsurfing is incredibly low considering how frequently it is used and how many positive experiences are going around.

In November last year, my partner, Alex, and I spent one week couchsurfing on a yacht with a father – we’ll call him Presley – and his two young children in the South Island of New Zealand. When Alex and I decided to send a Couchsurfing request to the family, we didn’t know what to expect. In the end, it was one of the most satisfying and exciting Couchsurfing experiences we’ve had. It was refreshing to see Couchsurfing through the eyes of a family. Presley said he participates because he hopes that by exposing his kids to travelers, they will be inspired to engage with world the same when they are older. Once an avid traveler himself, Presley said Couchsurfing is also a way for him to break away from his daily routine. Even though his lifestyle no longer permits him to be a nomad, that’s no reason he can’t continue exploring the globe vicariously.

Unfortunately, some people think that Couchsurfing is simply about free accommodation for travelers on a budget. They’re wrong. Though the project is aimed at a cultural exchange rather than a monetary one, every host and surfer participates on their own terms and for their own reasons. There are no hard and fast rules. If you’re a parent whose children have grown up and moved out of the house, maybe you just want to fill those empty beds once in a while and pay forward a kindness that was paid to you in the past. If you’re a travel-curious non-smoking, vegan, it’s within your discretion to decline any and every carnivorous chain-smoker that asks to stay on your couch. In the end, the terms of where you stay, how long you stay, who you stay with and what you do while you’re staying are all negotiated on an individual basis.

While Couchsurfing may not be for everyone, anyone can do it. I’ve surfed the couches of mature 20-somethings and wild over-70 retirees with a range of characters in between. The only expectation among all couchsurfers is for members of the community to treat one another with common courtesy and respect. It’s important to remember that you are not only stepping out of your own comfort zone, but you are stepping into someone else’s.

When I was couchsurfing, nearly every single host invited me to a sit-down dinner or a meal of some kind as a way to break the ice. To show my appreciation, I always washed the dishes and offered to plan the next evening’s meal if I was staying for more than one night. It might not seem like much, but think about how exciting it might be if someone from another country cooked you dinner for a night? These seemingly simple interactions and small kindnesses can pave the way for lasting friendships, or at the very least, they can freshen your perspective and open your mind to something new.

That’s not to say that Couchsurfing hasn’t had its fair share of social, technical and financial challenges, but the project continues to thrive because of the ideas it represents. It’s easy to shake your head and sum it up as a foolhardy endeavor, but it’s changing lives in every country in the world.